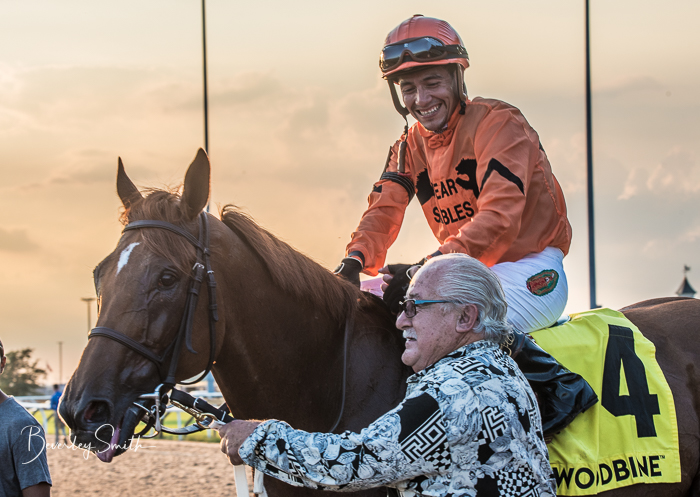 Woodbine was giving away $1,575,000 in purse money on Woodbine Mile day, enough to attract horses that had run in Britain, France, Germany and the United States.

They came all that way, only to find some Canadian horses had tied their racing slippers on and  just wouldn’t give in.

Northern Dancer would have approved.

The Dancer raced the last start of his life in the 1964 Queen’s Plate at Woodbine, and 54 years later, Johnny Bear ran a blinder, too. Mild-mannered at home, ferocious in a homestretch, Johnny Bear surprised us – again – by winning the $300,000  Grade 1 Northern Dancer Turf at odds of 16 to 1.

Haven’t we seen this movie before? Indeed. Johnny Bear surprised everybody last year in the Northern Dancer Turf, too, winning it at odds of 9 to 1. And he defeated a horse to whom he is now becoming a nemesis: the flashy chestnut Hawkbill, winner of the $600,000 Dubai Sheema Classic last March.

Hawkbill came back for more this year, favoured to win again, and this time finished only eighth, giving up the chase late in the stretch.

Hawkbill set the pace, but was dogged by Roger Attfield’s Tiz A Slam at every step. “He got harried by the other horse the whole race,” Spencer said, clad in Godolphin blue. “It ruined his race and mine.” Tiz A Slam finished sixth.

Behind all of that drama lay Johnny Bear, tucked in behind the leaders, waiting, with Luis Contreras at one point figuring out that he’d either have to go around a wall of horses one way or another. He saw daylight to the inside during the stretch run and that’s exactly where he pointed Johnny Bear.

Johnny Bear rumbled. His orange colours were unmistakable, flashing bright. He won by half a length in a swift 2:25.75, just short of Raintrap’s course record of 2:25.60 set 24 years ago. At age seven, Johnny Bear was the oldest horse in the race.

“He’s quite a horse,” co-owner John Burness said. “I wish I had a barnful of them.”

Johnny Bear hadn’t won a race since his Northern Dancer victory last year. He contested the Canadian International last October, but finished only 10th. Burness noted that the horse did not appreciate the soft turf that day. He’ll head back to the International again, but if the rains drench the grounds again, Burness said the horse probably won’t run. Obviously, he does love Woodbine’s turf course – if it is firm.

Johnny Bear is owned by Burness’s Colebrook Farms and Danny Dion’s Bear Stables, hence the orange colours with the black bears cavorting about the silks. Dion watched Johnny Bear’s stunning victory last year on a television set at home. And he did the same thing this year. He had been in Toronto 2 ½ weeks ago when Johnny Bear finished second in the Halton Stakes – a race he won last year quite easily.

“I miss him,” Burness said of Dion. “He hasn’t taken a picture yet with him in a grade one. I hope he’s watching.” The two got together at the annual Toronto yearling sale to buy this son of English Channel, thinking he’d go for $200,000. But Dion said yes, to $275,000, the top price of the sale, and Burness said yes to continuing with the plan. Johnny Bear has won it all back and more. But it has taken time.

The horse’s trainer, Ashlee Brnjas, also did not attend the race, feeling ill. She, too, watched on television.

If Johnny Bear is Canada’s most lovable underdog, Starship Jubilee is the apple of owner Soli Mehta’s eye. He has owned racehorses for 40 years and decided to go in with trainer Kevin Attard to claim this filly about 1 ½ years ago for $16,000.

“She is the first filly I got that ran as far as this level,” Mehta said. “I paid good money for horses, but never got lucky as this one. It’s a great thing.”

He says it won’t be easy for him to let her go. She’s entered in the Keeneland breeding sale in November. “She’s a 5-year-old and we don’t want to run her any more because she’s got the top level,” he said. “She’s going to fetch a good price and I’m not a breeder.”

Attard blames himself for the mare’s rough spot in the spring at Woodbine, after she won the Sunshine Millions Filly and Mare Turf in January at Gulfstream Park. His mistake? He gave her time off. Let her freshen up after a long season. But when he got her back to the track, she wasn’t quite herself.

He ran her in the Nassau Stakes at Woodbine – which she had won the previous year – and finished fourth. “She ran as good as she was ready to run,” Attard said.

“But then we kind of made another stupid mistake by running her a mile and a quarter (the Dance Smartly – which she won last year) after that bad race,” Attard said.

“So we just had to regroup and get her confidence back and so we did that.”

He was lucky to find the right race for Starship Jubilee, and she won it with flair on Aug. 6. Her last work was sizzling, four furlongs in 47.40. “I just knew she was kind of back to her old self,” Attard said.

By winning the Canadian Stakes, Starship Jubilee toppled two Chad Brown entries: New Money Honey, a filly that had won the Breeders Cup Juvenile Fillies Turf two years ago, and the Belmont Oaks last year; and the 4-year-old filly Inflexibility, third to Holy Helena in last year’s Queen’s Plate, and winner of the Wonder Where Stakes and Carotene Stakes, last year. She has been racing top-class mares in the United States, too.

You wouldn’t know it to look at her. “She’s not a big filly,” Attard said of Starship Jubilee.  “You wouldn’t walk down the barn and point her out. But she’s just all race horse. When you see her on the grass and she works on the turf, she just extends so much with her stride, it’s unbelievable.

“When we claimed her, we could never have imagined what she turned out to be. She’s definitely got a lot of heart.”

Canada’s 2017 Horse of the Year, Pink Lloyd, delivered the shocker of the day when he burst out of the gate for the $125,000 Bold Venture Stakes, unseated rider Eurico Rosa da Silva, and started to run off, riderless down the track. Chief outrider Rob Love caught him quickly. Love knows him well. He’s sometimes led the 6-year-old gelding out to workouts.

Back into the gate went Pink Lloyd with Da Silva again on his back. In the final moments, Pink Lloyd’s odds sank from 3 to 5, to 4 to 5 and then to even money. He finished fifth, flattening out late in the stretch. Yorkton, ridden by Jess Campbell and owned by Chiefswood Stable, won the race.

Da Silva said Pink Lloyd got very excited in the gate. “It’s a hot day and I think that would turn him off,” the rider said. “He went in the gate, then he exploded on the door and he was loose from the pony.

“When he came back to the gate, he was completely washed out and his mind was not there any more.

“We need to regroup. He’s a good horse and believe me, this horse is going to come back stronger. I believe in this horse.”

Pink Lloyd also hopped out of the gate at the proper start, a funny little habit he seems to have adopted in recent starts. Pinkie, as they call him, is just eager to run. “We are blessed for what he has done for us,” Da Silva said.

To Oscar Performance’s trainer, the win was like a homecoming. And a vindication.

But the colts’ decisive victory was his fourth Grade One win and a relief after his previous start, when jockey Jose Ortiz pulled up the 4-year-old during the Arlington Million on Aug. 11. He was vanned off.

Erin is still emotional about that day. “By the time we got back to the barn, I think we were all pretty shaken up,” she said.

“He’s a barn favourite horse. He’s a ham to be around. Everybody loves him. To see that happen to your best horse is heart breaking. To come back and do this just means the world. We’re all very thrilled and a little emotional.” 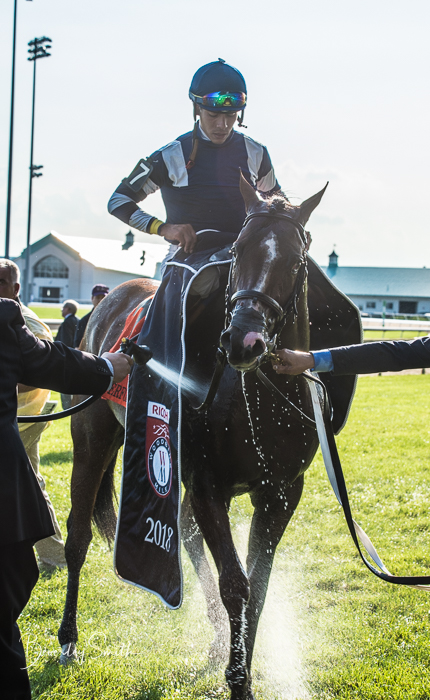 In Chicago, the crew breathed a sigh of relief when Oscar Performance walked just fine and seemed to be cooling out okay and didn’t seem stressed. “We knew we were going to be okay,” Erin said. Tests came back clear.

Oscar Performance won the Woodbine Mile with a crafty ride by Ortiz, who managed to get away with a tardy 24 3/5 first quarter. “I knew we were home free,” Erin said. “I knew that’s his pace and he can kick on from that.”

By winning the Woodbine Mile, Oscar Performance has earned a spot at the Breeders’ Cup. Erin said he would train up to the race in Kentucky in seven weeks. 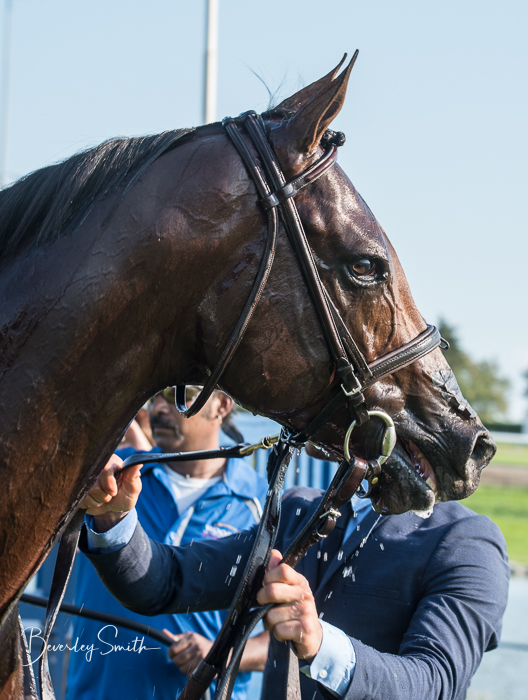