The torrent of rain that pummeled Fort Erie Racetrack three races before the $400,000 Prince of Wales Stakes, the second jewel in Canada’s Triple Crown was apocalyptic. In a few minutes a track that had been rated fast became sloppy.

It was gumbo. It was soul sucking. After all, it is a dirt track, not Tapeta, like Woodbine. The scene looked like the end of the world. There were conversations in the damp corners of Fort Erie about constructing an ark. The fifth race at about 6:30 p.m. (Prince of Wales scheduled for 7:40 p.m.) endured the worst of it, riders soaked to the bone, horses covered in mud. And even before the rains let up (meaning that the drops fell straight down instead of sideways), trainer Mark Casse contemplated scratching Queen’s Plate winner and heavy 2 to 5 favourite Wonder Gadot. He didn’t.

“I had concerns with everything,” Casse said later, after the powerful filly won easily by 5 ¾ lengths. “I didn’t have concerns about her. I was more concerned about her health and worrying about her. She’s my child. They don’t come around very often like this.”

He said he had been on the fence about scratching her. His mind went back and forth. But he’s glad she did run. She won with her ears pricked. Wearing blinkers for the second time seems to have had an impact.

Jockey John Velazquez said that while the filly was warming up, she was on her toes. The more he looked at that sludge underfoot, the more he thought he didn’t want all of that to be thrown back at her into her face. He decided, in the moment, that he’d take her to the front and be done with it.

Casse had no qualms about Velazquez’s decision. He does not tell the 46-year-old veteran jockey how to ride. Velazquez, born in Puerto Rico, was leading jockey in 2004 and 2005 in the United States, and became the leading money-winning jockey in the sport’s history in 2014. He’s won the Kentucky Derby twice. Remember, he was the regular pilot of Wise Dan, the brilliant turf miler. He’s won more than 5,900 races. And to launch his career in the United States, Velazquez learned how to speak English by watching “The Little Mermaid” with his young daughter years ago. He does a mean karaoke. Who can argue with this guy? 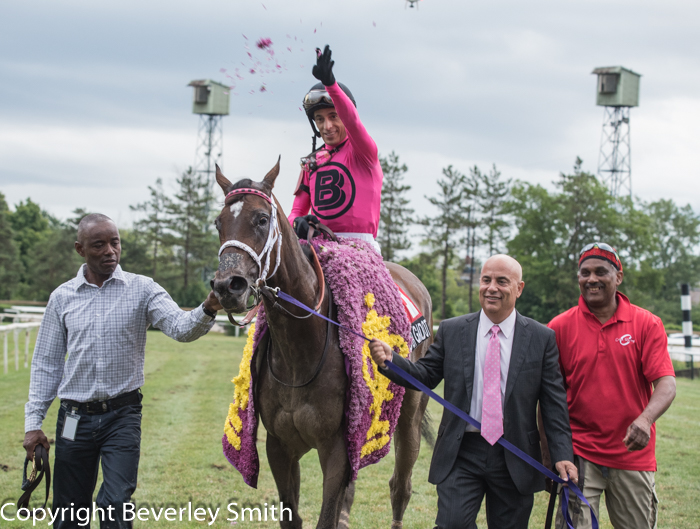 So yes, Casse knows that Velazquez knows more than he will ever know about taking the reins, breaking from the gate, and getting to the wire first. “We were flying over here today and he was telling me what each horse was going to do [in the race,]” Casse said. “And that’s not just this race. It’s any race….That’s what makes him great.”

Wonder Gadot’s final time of 1:58.71 for the 1 3/16th mile trip was more than five seconds off a track record set 24 years ago, but who can be surprised? The lads laying out the plywood across the dirt track to the winner’s circle stood with mud up to their ankles. Luis Contreras, riding second-place finisher Aheadbyacentury, came from the back of the field and wore the slop on his cheeks.

So now, of course, Wonder Gadot has won two of the three Triple Crown jewels. The final leg, the Breeders Stakes at Woodbine on Aug. 18 at 1 ½ miles on the turf is probably not on her trajectory. The Alabama Stakes at Saratoga on the same day is.

The filly that is all the rage south of the border is Monomoy Girl, who defeated Wonder Gadot by a half length in the Kentucky Oaks and then went on to win the Acorn Stakes and just two days ago, the Coaching Club American Oaks, overcoming the outside post. Monomoy Girl’s connections are targeting the $1-million Cotillion at Parx Racing at 1 1/16th miles on Sept. 22 rather than the Alabama at 1 ¼ miles. Her connections feel she has wrapped up the year-end honours for 3-year-old fillies. Casse begs to differ.

“We almost got her once,” Casse said. “We know that. I have the utmost respect for Monomoy Girl. And she’ll be tough. But if anybody can beat her, I think we can. We’re not giving up.”

Both fillies will target the Breeders Cup Distaff at season’s end, where they will probably finally go toe to toe. One thing Casse knows: Wonder Gadot loves Churchill Downs, the site of the Breeders’ Cup. But so does Monomoy Girl, who won the Oaks there. 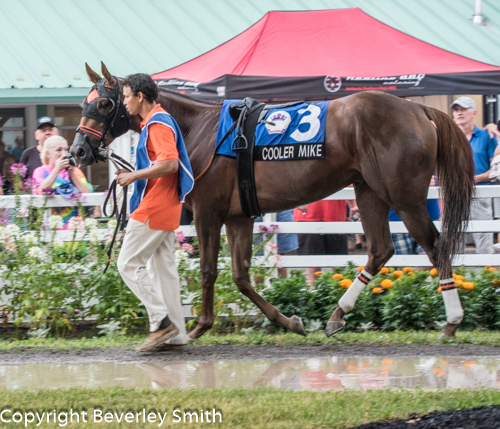 Cooler Mike, which ended up third at odds of 8 to 1.