Wonder Gadot (alias Wonder Woman, check her halter) couldn’t care less about the apparent devilishness of her role in the $1.25-million Travers Stakes on Saturday at old Saratoga.

The Queen’s Plate winner is, well, a FEMALE running against the best American 3-year MALES (minus Triple Crown winner Justify, retired with a minor injury.) Six fillies have won the Travers, but the most recent, Lady Rotha, scored 103 years ago. No filly has run in the Travers in 39 years, since 1979.

After Wonder Gadot thrashed Canadian-bred colts in the Queen’s Plate and the Prince of Wales Stakes – the first two jewels of the Canadian Triple Crown – she at first was headed to the big Saratoga filly race, the Alabama, until trainer Mark Casse and owner Gary Barber switched gears and took dead aim on a bigger target: the Travers.

Obviously, Casse and Barber think the big filly could win the thing. “I really feel that she is as good as any of them,” Casse said “To be able to accomplish something that hasn’t been accomplished in 100 years, I think it makes sense. And Gary thinks it makes sense. We’ve got a big, strong filly. When you go and look in the paddock, she may be the biggest horse in the race.”

Last year’s juvenile champion Good Magic will probably go off as the race favourite, after the coppery coloured colt won the $1-million Haskell Invitational at Monmouth Park, following his second-place finish in the Kentucky Derby, and after a fourth-place finish in the Preakness, when he fought with Justify for the lead in the early going.

To Casse, the Travers makes sense because Wonder Gadot relishes the 1 ¼-mile distance of the race. And the Travers is a week later than the Alabama, giving the filly an extra week. And being a filly, Wonder Gadot will get a five-pound weight allowance. “Going a mile and a quarter, that means something,” Casse said. 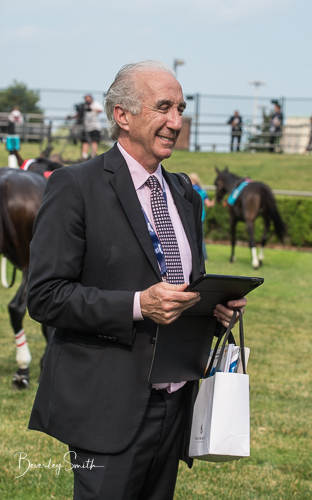 “Gary is always one to step out of the box and we just thought this was a good year to try it. We already have a filly that’s beaten colts a couple of times. And myself, I’ve had some pretty good luck with Tepin beating the colts. We’re trying to make history.”

Casse trained Tepin, a mare, to win the Breeders’ Cup Mile against colts. She recorded three Group/Grade One stakes wins in three different countries against males, including the Queen Anne Stakes at Ascot in England and the Woodbine Mile in Canada. Casse also won a Queen’s Plate with another filly, Lexie Lou.

The thinking that fillies are the weaker sense doesn’t wash with Casse. “They do it in Europe all the time,” he said. But the reason it doesn’t happen so often in North America is that racetracks offer up races for fillies that correspond with the big events [for males]. Example: the Kentucky Oaks is run the day before the Kentucky Derby. The Alabama is run a week before the Travers. In Canada, Woodbine moved its Oaks race back so that it gave the fillies three weeks to recover for the Queen’s Plate. And there has been a rush of filly winners since.

“But I think we’re trying to make history here, and we feel like she has a good shot to do it.”

In the past couple of months, Wonder Gadot has emerged as a filly worthy of her name. Before the Queen’s Plate, she had lost six major races by less than a length, including a half-length loss to Monomoy Girl in the Kentucky Oaks in May.

“It was heart-breaking,” Casse said. “I think she lost about $1-million in purses in less than four or five feet.”

Casse added blinkers for the filly’s last two starts, hoping to focus her attention, but really, he feels that the secret to her recent success is running longer distances. She’s like a powerful tank that keeps coming. She’s a cool, calm customer. She’s been at her best at races that were 1 1/8 miles or further.

In fact, Casse feels – and race analysis will back him up – that her best race was in the Kentucky Oaks, even with the loss. “I really believe had we not gotten into some trouble late on the turn that it could possibly have been a different outcome,” Casse said. “And her race in the Canadian Oaks [second to Dixie Moon], was just a disaster. Everything went wrong. Look at her races at a mile and an eighth and beyond, she’s been a superstar.”

Both Oaks races were run at 1 1/8 miles. The extra eighth of a mile in the Travers “isn’t hurting her feelings,’’ Casse said.

Regular rider John Velasquez will not be aboard Wonder Gadot this time because he is committed to Vino Rossi, a Todd Pletcher trainee – and Velasquez has a long and storied history riding for Pletcher. Casse turned to Irad Ortiz, Jr., who is currently leading the Saratoga meet. And he’s been on fire this season.

Casse and Ortiz will watch some films together, particularly the Kentucky Oaks and the Queen’s Plate. “The only thing you have to do is maybe get her into the race a little bit early and not let the speed get too far away,” Casse said. “She doesn’t have a big turn of foot. It’s more of a big continuous motion, so you don’t want to leave her with too much to do. She just kind of keeps going. She doesn’t have any quit in her.”

She’s tough, for sure. Wonder Gadot has had 14 starts with few breaks in her career. “Every now and then you just get a horse that can do it and she thrives on it,” Casse said. “We ran her in the Breeders’ Cup [Juvenile Fillies last November], and brought her home to our training centre in Ocala, planning to give her a little time. And she was so full of energy, I told Gary, I don’t know if we need to give this filly some time.”

So she won a stakes race early this season and has been going ever since. “I had the pleasure of spending a lot of time around Alan Jerkins when I was younger,” Casse said. “And he always said to me: “I don’t understand trainers. They want to rest them when they’re running good. But you rest them when they are running bad. And she keeps running good. So I keep running her.”

And in most other years, Justify’s Triple Crown victory would automatically give him Horse of the Year honours. But his career lasted only six starts. Will that spot be open, too?