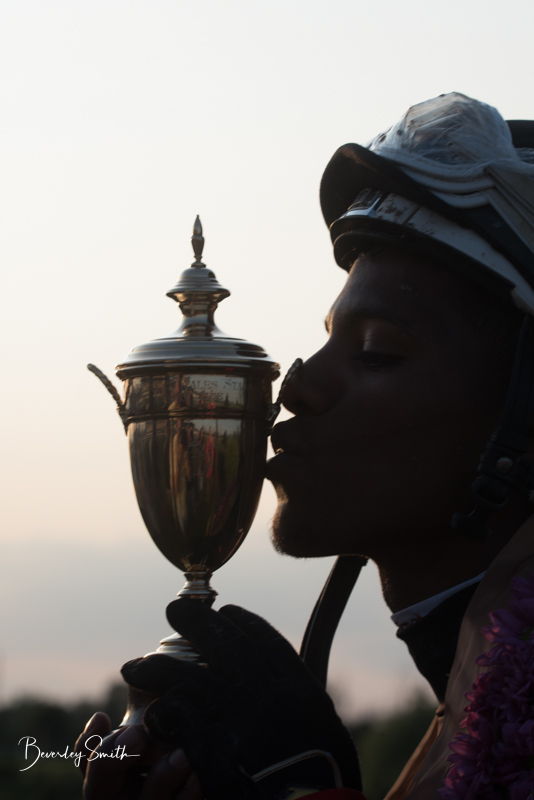 Tone Broke, another gem bred by Ontarian Sean Fitzhenry, steamed home to win the $400,000 Prince of Wales, as the second longest shot on the board. And once again, Little Saratoga, just like Big Saratoga, became a graveyard of favourites.

Overlooked a tad at 5.60 to 1, Tone Broke laid waste to One Bad Boy’s shot at winning the Canadian Triple Crown, after the California ridgling had made the Queen’s Plate his own. One Bad Boy had been supplemented to the Prince of Wales for $12,500, with an eye on the new $500,000 bonus for winning all three races.

But One Bad Boy finished third, a neck behind Avie’s Flatter. “He broke a step slow,” said rider Flavien Prat of the Queen’s Plate winner.

Tone Broke, a $40,000 Keeneland yearling, accomplished this feat close to dusk, with the sun falling behind the five-horse field as they raced down the stretch at the Little Racetrack That Could, swelled to its capacity on a breezy summer day. The ice cream truck dealt its treasures steps from the walking ring. The parking lot was clogged. The throngs pushed the second highest wagering total in the track’s history through the windows: $2,014,296, just behind the mark of $2,188,000 bet in 2016.

It was glorious, made even more glorious when a 6-year-old horse, Mr. Changue won a $6,250 claiming race, 12 days after falling into a sinkhole while minding his own business grazing near the track. Up to his neck he went while track folk and the Fort Erie Fire Department staged a major rescue, pulling him out of the muck caused by a watermain break.

Mr. Changue, a $3,000 yearling purchase who had earned almost $100,000 in his dependable way,  handled it all in stride (so to speak). With Kirk Johnson aboard, he had won the start previous to the accident and on this Tuesday, won again, telling the world he was okay. News outlets in the United States carried the story. An enthusiastic Melbourne, Australia network reported that he had actually won the Prince of Wales 12 days after the sinkhole saga, sort of forgetting that the actual winner was Tone Broke.  Yahoo news reported that Mr. Changue had nearly died in that famous hole.

A racehorse named Mr Changue has been rescued from a sinkhole caused by a busted water main at a racetrack in Ontario. #9News

All in all, it was a moment at Fort Erie. It will go down in the Fort Erie annals, just like Puss N Boots jumping the hedge and going for a swim in the infield lake, with his trainer jumping in, too, prompting a race to be named after him.

Mr. Changue is now part of Fort Erie legend. In fact, he darned near stole the show.

But the Prince of Wales Stakes is supposed to be Fort Erie’s biggest moment of the year, and it was dramatic in its own way.

Queen’s Plate winner One Bad Boy was the even-money favourite, while Avie’s Flatter, second in the Plate and Canada’s top 2-year-old last year, was second choice in the wagering at more than 2 to 1. And the two of them started side by side in the gate.

One Bad Boy took the lead with a length advantage throughout, with Avie’s Flatter shadowing him, but around the final turn, Avie’s Flatter loomed up alongside his nemesis and actually wrestled the lead from him at the top of the stretch.

“I left out of there and I was fine with the lead,” Prat said. “He was comfortable. He was relaxing well. But when I asked him to make a run, he could not stay at the same pace. It’s probably not his best surface, and the start might have cost him a little bit, too.”

Then, WHOOSH. Along came Tone Broke, waiting in the bushes, just behind the leaders. “I knew he was going to give me everything he had,” Santana said.

Tone Broke won by two lengths in 1:56.56 for the 1 3/16th mile test. Tone Broke had finished an uneasy third in the Plate three weeks ago, but two things were different this time: there was a jockey switch from Luis Contreras to Richard Santana Jr., a Delaware-based jock who had ridden Tone Broke before, when he had finished second to Maximum Security vanquisher King for A Day in the Sir Barton Stakes at Laurel Park; and secondly, Hall of Fame trainer Steve Asmussen had removed the blinkers for this race.

Fleming thinks Tone Broke will stick around and finish up the Canadian Triple Crown. The colt with the long, flowing tale (remember Whirlaway, the 1941 U.S. Triple Crown winner?) can run all day, and he doesn’t seem to care less what surface he runs on. He had never set foot on a synthetic surface before the Plate at Woodbine, he loved Fort Erie’s dirt, and he won’t mind the grass of the Breeders Stakes. “I think he would run on broken glass,” Fleming said. “He’s that good.”

He’s dangerous, too, because he’s versatile. He’s run twice in Dubai earlier this year, and said: “Nyet,” to it all, finishing sixth, defeated by more than 20 lengths in an allowance and 14th, beaten by more than 60 lengths in a $300,000 stakes race. “He didn’t like that,” Fleming said. “He likes your country a lot better than theirs. This is home.”

But it will be up to Asmussen and the owners, L and N Racing to decide. L and N Racing, a partnership of four, started their first horse only in June of 2015. But they got their lessons early on how hard it is to win races when Smart Pioneer took 11 starts to break his maiden.

And look out, earlier this year the partnership bought a half-brother to Preakness winner War of Will for $260,000, shocked that the son of Tapit didn’t attract more bidders. The partners include lawyer Lee Levinson, sons Andy and Michael, and family friend Don Nelson. And they got off to a fast start with Lookin At Lee, a $70,000 purchase that finished second in the 2017 Kentucky Derby behind Always Dreaming.

Lee Levinson is also involved in the oil and gas industry in Tulsa, Oklahoma.

Santana, Jr., who had never ridden at Fort Erie before, is undefeated at the border oval. Like Laffit Pincay Jr. and Braulio Baeza, Santana is a native of Panama who came to the United States in 2006 to ride, with Delaware Park his home track. He was the leading rider in 2013 at Oaklawn Park. One of his clients is Asmussen. He earned his 1,000th victory last year.

“He broke really sharp,” Santana said of Tone Broke. “He pulled himself to where he wanted. That’s what this horse does. He was really comfortable in the position that he was.

“As soon as I started asking him, when we started for home, he kept running,” he said. “I knew I had plenty of horse.

“The longer the races are, he’s going to be better and today he proved a lot,” Santana said. “He kept fighting to the end and he gave me a nice finish at the end. He run a really nice race today.”