Tone Broke is big and bullish, at least to a point.

But so talented that he won the $400,000 Breeders Stakes over 1 ½ miles, in his first turf test on Aug. 17 at Woodbine. Patience was the key. And 34-year-old jockey Rafael Hernandez supplied it.

Tone Broke scattered the pigeons when he broke from the gate in the Queen’s Plate, bearing to the inside, and then showing little interest in relaxing. Still, he finished third to One Bad Boy in that first jewel of the Canadian Triple Crown.

It looked as if the Breeders Stakes was going to be a replay. Tone Broke came out of the gate, like a bull at a rodeo and Hernandez earned his ducats, trying to get him to relax early. Head high, mouth open, Tone Broke looked like a wild horse.

“He gave me a hard time to relax,” Hernandez said. But after the first furlong, he did.

But the troubles didn’t end there. Tone Broke stalked pacesetters Seguimi (29 to 1, finished eighth of nine), then supplemental entry Rising Star (14 to 1, ended sixth), but Pay for Peace, a 6 to 1 shot, sat to Tone Broke’s side, penning him in. And Pay for Peace just stubbornly hung by his side. Tone Broke couldn’t get out.

“I had to wait,” Hernandez said. “He was stuck in there. I tried to move out a little bit but [Pay for Peace] wouldn’t give up. He stayed there.

“I’ve got a big horse – he’s got a big heart – I thought I could move a little bit and it would be okay.” But Pay for Peace seemed glue to his spot.

“It looked like it was just going to be a replay of the Queen’s Plate and a little where he didn’t want to relax early,” said Darren Fleming, assistant trainer to Steve Asmussen. “But Raffi got him to relax and everything went smoothly.

“We had a little traffic trouble and my heart was pumping in the turn, but Tone Broke was talented enough to overcome it.”

Favored Avie’s Flatter (second in the Plate and second in the second jewel, the Prince of Wales at Fort Erie) and He’s a Macho Man swung wide, but raced in tandem to the lead to a 1 ¼-mile time in 2:05.95 on the yielding course. Avie’s Flatter took over at the head of the stretch.

Finally, Tone Broke shook loose and barrelled to the finish, winning by 1 ½ lengths in 2:30.43. “It’s a good thing we have a long stretch,” Hernandez said. “All you have to do is be patient. I used my patience and as soon as I was in the clear, he did the rest. He has a big heart.”

Avie’s Flatter lost second place by a nose to his stablemate He’s a Macho Man, ridden by Contreras, who usually rides Avie’s Flatter. 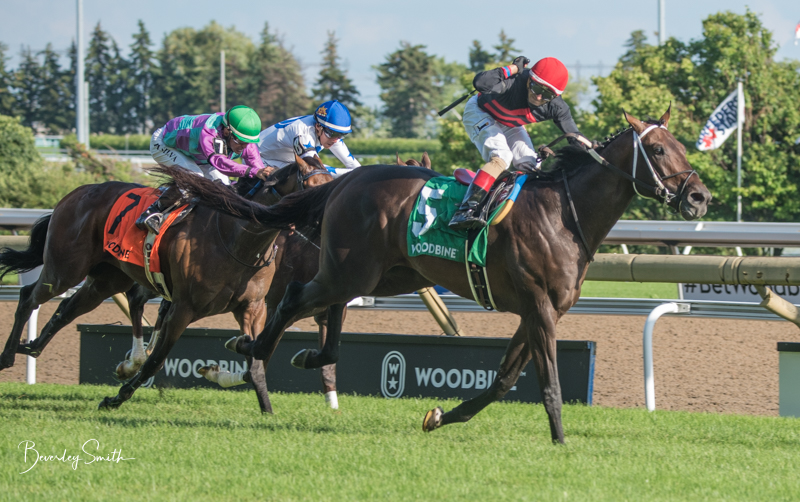 Thus, Tone Broke has won two-thirds of the Canadian Triple Crown, and a more settled race in the Queen’s Plate might have made him a Triple Crown winner. He hadn’t set foot on a synthetic track before the Plate. And he had a different rider in each leg. And now he’s conquered turf, too.

“It’s not how you start,” said Hernandez, who has taken over as leading rider at Woodbine, as Eurico Rosa da Silva winds down his career. “It’s how you finish.”