Home » Blog » Time to Rumble in the International
Tweet
0 Shares

Pumpkin Rumble sounds like a pretty wild cat. The name conjures up images of smashing pumpkins, taking part in various silly rumble games: catapulting the orange orbs in lofty arcs over a green field , leap-frogging them, crabwalking with a big rustic gourd in your lap in a race for the finish line, all of that pre (or post) Halloween stuff.

But no, Pumpkin Rumble – the horse – is a cool sort of animal, quite laid-back actually, humble with the  15 to 1 morning-line odds he’s been handed in the $800,000 Canadian International Championship and wondering why anybody wants to take his photo during the daily grind on the Woodbine backstretch.

Owners Bill and son Al Ulwelling of Elk River, Minnesota have no idea where the horse got his name since they claimed him for $30,000 in 2014 down at the Fairgrounds in New Orleans. Had never heard of a pumpkin rumble.

“We liked his breeding for the turf,” said Al, speaking of the son of glorious turfer English Channel. “Back when he was a younger horse, he was pretty well balanced. He wasn’t very big. But he was like an English Channel, as far as the size of him.”

Pumpkin Rumble didn’t set the world on fire after the Ulwellings claimed him. There was no flash to this chestnut. “He never really showed any true potential right at first,” Al said. “In the workouts in the morning, he kind of just did what was asked of him. You didn’t look at this horse and say he was a Derby horse. He just looked like a good honest $30,000 claim in his early years.”

Now after the defection of Tiz A Slam (sick), Pumpkin Rumble is the lone Canadian colour-bearer in this 82nd running. He’s considered a Canadian entry because he’s lived at Woodbine for several years in the Kevin Attard stable, so much so that he’s a local boy. You could say that he has some big shoes to fill, as far as Canadian entrants go, but no Canadian entry has won since Thornfield in 1999 – and he was an 18 to 1 shot (this at a time when the race was worth $1.5-million.)

Other notable Canadians to win this event in those years after Secretariat made the race an international destination: Chief Bearhart in 1997, Sky Classic in 1991 and Snow Knight in 1975.

“This is a big task,” Attard said. “But we’re at home. We’ve got home field advantage.”

Although European horses are accustomed to travelling, Attard still thinks that a local yokel sitting right in his living room at Woodbine for months, needs only to get dressed up and walk over for a race like this with no feathers ruffled. “There’s a lot to be said about that,” Attard said. “I do think there is a bit of an advantage. It doesn’t change anything. He’s running against Grade One competition and he’s going to have to have his running shoes on, no doubt about it.”

Also, factors that stir hope: Pumpkin Rumble appreciates soft turf and it is scheduled to rain Saturday morning – and other horses in the race might prefer firmer ground. Pumpkin Rumble has only five opponents, although they come from France, England, Germany, United States. Irish-bred Desert Encounter is back to defend his title. He’s won three consecutive races and at seven years old, he’s one year younger than good old Pumpkin Rumble. The oldest horse to win the International was Collier Hill in 2006. He was 8 years old.

Pumpkin Rumble has been carefully managed throughout his career. The English Channels, as many know, get better as they get older. “He’s happy doing his job,” Attard said. “We take good care of him. And he takes good care of us.”

By that, Attard means that Pumpkin Rumble delivered their first graded stakes win – ever – to the Ulwellings in the 13 years they had owned horses, when he scored a gritty half-length victory over stablemate Melmich in the Valedictory Stakes last December at Woodbine. It was a Grade 3 event.

“That was the pinnacle of it all,” Al said. “He had run second in Grade 2s and 3s, and had never quite got it. Then Kevin said: ‘Hey, he’s getting a little braver and a little stronger.’ Before that he said he thought we were sitting on a big one, so I booked a plane ticket.” With some family issues coming up, Al had to forfeit the trip. But he plans to be at Woodbine on International day.

Al also knows that Pumpkin Rumble seems to be at his best during the cool weather, you know, just about the time that pumpkins ripen. “Last spring he got a little sour,” Al said. “He wasn’t injured or anything. We generally err on the side of caution with our horses. So we just sent him out. There really wasn’t anything wrong with him. I think he had run a third in a Grade 3.

“Then last year in the fall, about this time of year, he started getting a lot more relaxed, a lot more energetic, he showed more emotion, he enjoyed training more. And then his year, we tried to follow the same path, working towards the Valedictorian again. And he’s doing the same thing.” 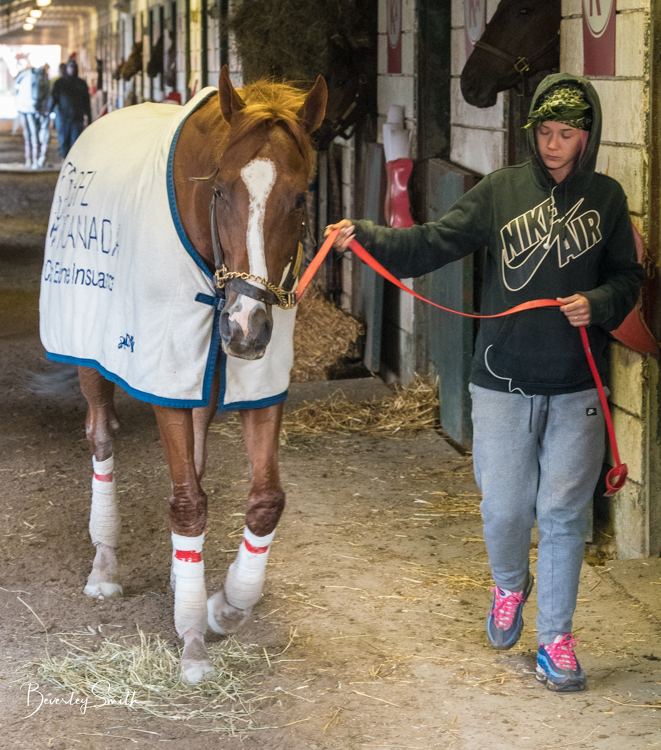 Pumpkin Rumble rarely ships away from Woodbine to race, but two weeks ago, Attard sent him to Pennsylvania to run in the $100,000 Alphabet Soup Stakes at Parx. The Rumbler went down there as a favourite and he won, too, setting a course record time of 1:40.21 for 1 1/16 miles on the turf.

“To be honest, it was a restricted race against Pennsylvania-breds,” Attard said. “I think if anything was impressive, is that he set a track record that had been held for 30 years. I think that says a lot. When you see a time set that’s been established that long a period, then you have to think it was a pretty legit race.”

So Pumpkin Rumble will pad up very quietly to his spot in the starting gate on Saturday and step into his outside post position. He won’t cause ruffles and ripples, but he’s at his very best right now – and with a small field, anything could happen. “He’s very quiet,” Attard said. “You’d walk right by him and not know who he is. Just a cool horse to be around. There’s nothing really negative to say about him.”

“He’s a cool little horse to root for,” Al said. “He’ll always have a good home. We’ll have a good retirement for him when the time comes. He is a really fun horse to be around.”