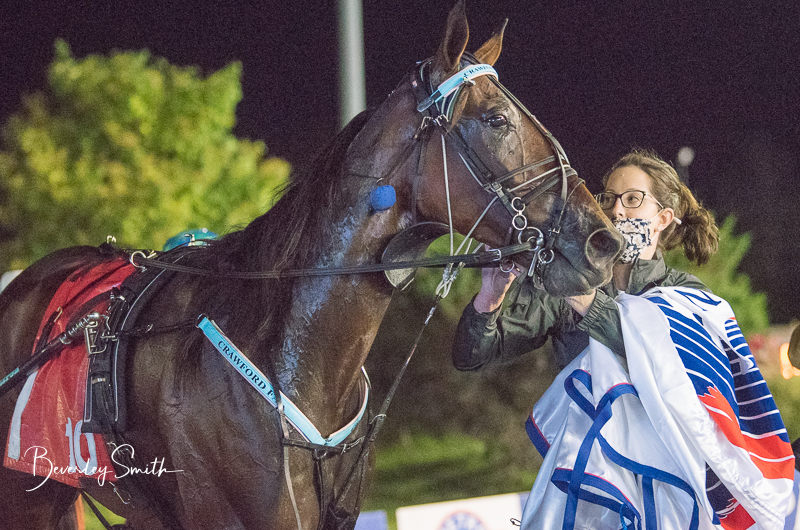 What can you do with a hundred dollar bill?

Buy an inflatable car bed? A few bottles of champagne? Tickets to see The Guess Who? An entire box full of used CDs at a garage sale? (Maybe two boxes.) A couple of steaks? The way things are going, a few pieces of lettuce?

Or you can pocket the dough and name a trotter “Ahundreddollarbill” and hope for the best.

And if you were the Crawford Farms Racing Stable of Erieville, N.Y., you could win the $606,500 Canadian Trotting Classic at Mohawk Park. And so they did, last Saturday, on a night packed with $1.6-million of stakes races.

In this race, all eyes were turned to Fashion Frenzie to do the trick. He had won three consecutive starts, the last one the $240,000 Goodtimes Trot a week ago at Mohawk, sizzling off the mile in 1:53.2. The gelding by Archangel had won five of nine starts this year, and looked the part for trainer Richard Moreau.

Winning Ticket, winner of 10 of 10 starts this season in Ohio, supplemented to the Classic and for all his trouble, got the outside post 10. Spy Booth had won the Zweig at Vernon Downs, the lone win of his career. Still, he had won more money this season than any of the other starters.

Ahundreddollarbill had spent his time in the New York Sires Stakes (with a fourth place finish in the Yonkers Trot), winning seven of nine starts. But he had been racing on a lot of half-mile tracks. “It’s kind of crazy not to send them on the halves,” said driver Andy McCarthy. And the gelding has his best chance if he could get a good trip. “He relaxes well and races great off a helmet, so I kind of waited to work out a second-over trip tonight if I could,” said McCarthy.

It turned out he could. He followed the favourite Fashion Frenzie (racing first over). “I didn’t see much speed from the outside on paper, but still just trying to find someone to follow,” McCarthy said.

By the final turn, Ahundreddollarbill was just waiting to peel off Louis Philippe Roy’s helmet. “He was definitely swelled up in the last turn. He was ready to rock ‘n roll,” McCarthy said.

And did he. When Ahundreddollarbill passed the wire, he stopped the clock in a track record time of 1:52, the fastest mile of his life.

Winning Ticket wasn’t going to squander the supplementary payment, and roared to the front from his outside post to take the lead early, but ended up third, behind In Range. Fashion Frenzie at 4 to 5 odds, finished fourth.

McCarthy also won last year’s edition of the Trotting Classic in an upset with Chestnut Hill. This time, McCarthy thought he had the best horse in the race.

Ahundreddollarbill has now won $755,107, most of it this season.

McCarthy’s younger brother, Todd, also figured he had the best horse in the $100,000 Mohawk Gold Cup in Allywag Hanover, fresh off a win in the Canadian Pacing Derby a week ago. And Allywag Hanover was devastatingly good. There are few weak spots in his armour, making the 4-year-old gelding by Captaintreacherous tough to beat. He can leave, he can cruise at high gear, he can keep going in high gear. In the Mohawk Gold Cup, his opposition just couldn’t get close to him. He was in another league.

“He’s developed a new dimension, where he can leave and really carry his speed,” said trainer Brett Pelling. “He looks like there’s really no quitting – he’s loving it right now. He’s effortless, just travels over the ground so well. I think Todd fits him great.” Now his gate speed is so explosive, he puts himself in the race every time.

Pelling, born in New Zealand, as were the McCarthy brothers and Cardigan Bay, says Allywag Hanover will definitely come back as a 5-year-old. And that should make everybody else nervous. “This was my first Gold Cup,” said Pelling, who has won four Little Brown Jugs, four Meadowlands Paces, three North America Cups and 11 Breeders’ Crown races. “I’d like to him to be my second as well.”

The She’s A Great Lady final for 2-year-old filly pacers will be a cracker of a contest between the first elimination winner, Prohibition Legal, winner of all six races for owner Millar Farms of Stouffville, Ont., and Niki Hall, who won the other and is now undefeated in four starts for Tom Hill of Hamilton, Ont.

Prohibition had to come from the outside post in her elimination but seared the mile in 1:52 as the 6 to 5 favourite. This before the autumn chill set in. Driver James MacDonald said she had more in the tank at the end.

Niki Hall toyed with her opposition and won in 1:50 2/5, pacing her final quarter in 26.3. Dexter Dunn steered the daughter of Always B Miki to the lead by the half, and “the rest of the trip, I was a passenger, really,” Dunn said. “She was doing it very easily.” She won by 1 ½ lengths over Boudoir Hanover.

Dunn returned to drive Hambletonian Oaks winner Bella Bellini in the $414,000 Elegantimage Trot for 3-year-old fillies for Richard “Nifty” Norman. And all eyes were on the filly who had finished worse than second only once in 13 starts this season.

Donna Soprano, who hadn’t made it through the eliminations to get to the Hambletonian Oaks, won the Simcoe Stakes oh Sept. 10 for trainer Luc Blais and the Determination Stable of Montreal.

Donna Soprano sat third early, but zipped up to the lead by the half. However, Bella Bellini, the 3 to 5 favourite, sat in fifth early, uncovered, but challenged and took over the lead by three-quarters in 1:24.3.

But as the field rounded into the straightaway, Bella Bellini drifted off the rail, and Donna Soprano shot through to win by half a length in 1:52.6 with a final quarter in 27.3 seconds.

“Once we got the last turn out of the way, I could kind of drive on her a little more,” said driver Bob McClure of the winner. “She’s a gamer. She wants to get there first. I was a little worried when Dexter cleared me at the head of the lane, but luckily, she still had a lane and she showed her grit.”

After the race was over, however, Donna Soprano wouldn’t stand still. It was an effort getting a win blanket over her. She turned every which way but toward the camera. She had things to do, places to go of her own.

“She’s a handful,” McClure said. “It’s a great testament to Luc Blais and his team. She could have been easily ruined throughout. They’ve done an amazing job maintaining her, keeping her behaved. She actually progressively gets better behaved through the season.”