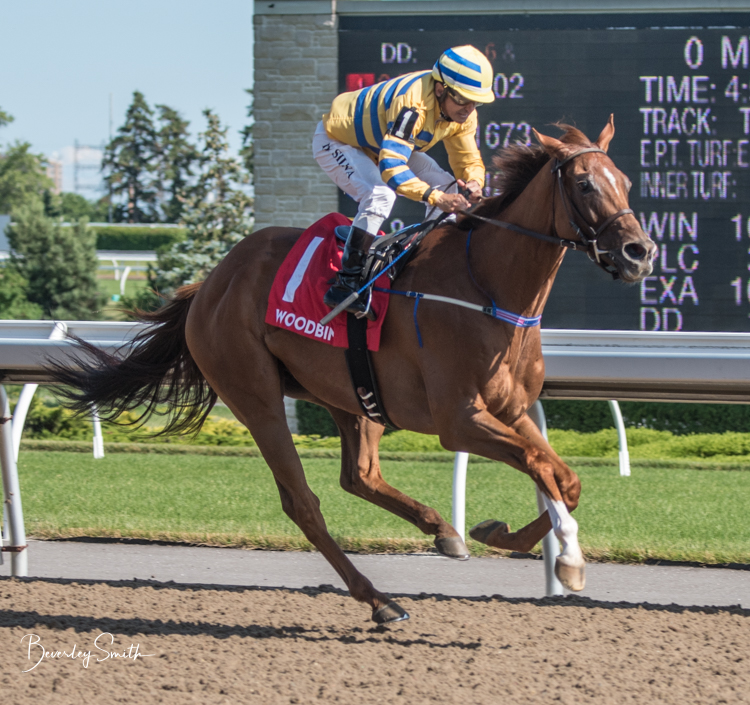 The most remarkable thing about Pinkie (aka Pink Lloyd) is that his best days may still be ahead of him.

The quirky chestnut 7-year-old just notched the 16th stakes win of his career when he overwhelmed a field in the $150,000 Vigil Stakes at Woodbine on July 14, winning by 4 ½ lengths, his ears pricked, happy as a clam in a pool.

The Equibase charts noted that he “inhaled” the field when he surged around the field from behind the leaders “and won off, making it look easy.” And to those who witnessed this feat, Pink Lloyd took off like a jet when it was time. Jockey Eurico Rosa da Silva said it was like an “explosion.” Those blue and yellow silks he carried went from rocking chair to rocket in a few strides. It was a breathtaking sight.

He ripped through the distance in 1:08.68, just off his own track record of 1:08.05 set in April of 2018 in the Jacques Cartier Stakes. And he carried the highest impost of his career: 127 pounds, giving from five to nine pounds to his competitors.

There were doubters, to be sure, skittish because of his record late last year, when he charged the gate several times, just wanting to get at the job, and then in his final start of 2018 in the Overskate Stakes in late October, he bled from the lungs. Badly. Enough that Tiller put him away for the rest of the year.

He had been defeated in his last two starts of 2018, apparently enough to knock him off his pedestal after being Horse of the Year in Canada for 2017, when he was undefeated in eight starts. He lost three starts in 2018. And in his life, having raced 24 times, he has failed to finish first only five times. He’s finished off the board only three times. He’s won 19 races and well more than $1-million.

So when it came to the Vigil Stakes, a six-furlong race he had already won twice (he loves six furlongs), and drew the rail post position, most of the handicappers opted for what looked like a rising star, the 4-year-old Dixie’s Gamble, winner of his past two starts, the last one by six lengths. They reasoned that rail position could be Pink Lloyd’s undoing.

This year, Pink Lloyd had already won the Jacques Cartier Stakes and the thunderstorm-delayed Greenwood Stakes, where he had to take refuge from lightning in the old standardbred paddock after the post parade.

But trainer Bob Tiller thinks that Pink Lloyd is better than he’s ever been.

The white-haired trainer sat on his perch at Woodbine last Sunday, and watched Pink Lloyd settle into third spot, well off the bustling pace set by Sable Island and Wyatt’s Town. And he saw the quickness of Pinkie’s rush when he made his move. “I’ve seen that before,” Tiller said. “He’s a horse that can come from anywhere. He can run like crazy. He can come from last if he has to.

“When he lay third, I was extremely confident. I know his kick. He loves horses to run at. He’ll just give you that “Oh really?”

“He always wants to chase every horse. He put in his kick around the head of the stretch.”

And he made the rest look as if they were standing still. (Dixie’s Gamble finished sixth of seven.) He’s three-for-three this year now, all in stakes races.

Pink Lloyd wintered at Paul Buttigieg’s farm over the winter, with his own big stall and a paddock to run in. Tiller visited him two or three times, called often.  But in the meantime, Tiller was figuring out how to manage Pink Lloyd’s latest quirks.

First of all, Pink Lloyd came back this year with more weight and muscle on his bones. Tiller was proactive about the bleeding/breathing problems. He adjusted the way that Pink Lloyd has trained this year, finding ways to make him a calmer horse. (He gets chief outrider Rob Love to accompany the horse in the post parade, rather than a regular pony rider.) And Pinkie has returned a more relaxed horse. Although Tiller touches wood when the field breaks – you never know when Pink Lloyd’s bullish urges might come back – Pink Lloyd has treated the gate with respect. As one of his handlers said: “He’s less of a dumb ass.”

Actually, Tiller calls Pink Lloyd the most intelligent horse he has ever trained – by far. “He’s from outer space,” he said.

Exercise rider Robert Mootoo says Pink Lloyd knows he’s a champion, that he has all of this world under control. “He’s amazing,” he said.

Intelligent? Recently, Tiller missed work for three days while he travelled to Peterborough, Ont., to be with his son, Robert Jr., who just received his real estate licence there. Tiller needed to make this trip. He went alone.

In the meantime, Pink Lloyd continued to work at the training track, with Tiller’s assistant trainer of 34 years, Tom Lotteridge and groom Michelle Gibson. But Pink Lloyd obviously missed Tiller. Mootoo was on him and Lottridge was at the rail when they noticed that Pink Lloyd’s behaviour changed.

It’s Pink Lloyd’s habit to stand by the rail in front of Tiller, watching all of the other horses galloping and working in front of him. He’d stand there a long time, watching.

Mootoo told Tiller: “He was so different when you were gone. He acted really strange for three days.”

But while Tiller was gone, Pink Lloyd kept looking over at the rail. And he got very upset because Tiller wasn’t there. “He wouldn’t cooperate,” Tiller said. “He wouldn’t’ stand there because he was upset.”

Mootoo said he felt really tense. “You could just feel it,” he said. “He just knows when Bob isn’t there. He doesn’t relax.”

“Apparently, he did miss me,” Tiller said.

He’s also very familiar with Gibson. When she’s not around, Pink Lloyd isn’t happy about that, either.

He’s king of Tiller’s stable. Tiller has trained a long list of good horses: Prince of Wales Stakes winner Win City, Rare Friends, Forever Grand and millionaires Winter Garden and Brass Pocket. Tiller, a member of the Canadian Horse Racing Hall of Fame, figures he’s won about 150 stakes races. But he’s never had one of the ilk of His Pinkness. “He’s a monster,” Tiller said.

“He’s our pride and joy,” he said. “We understand the horse and the horse understands us. The rider loves him. Everybody loves him. It’s a real love affair. And it keeps getting stronger. I know the day is going to come when we’ll have to retire him. He’ll get a good home.”

But for now, Pink Lloyd’s record indicates that he’s better than ever. And happy to boot. Tiller says it’s “totally amazing” that the horse has been able to come back as a 7-year-old at the top of his form after some “near disasters” last year. “It’s unheard of,” he said. That Tiller has been able to tinker with his quirks with the patience of Job to get him there is remarkable, too.

As Team Pink retired to the grandstand after the win, and Tiller was watching a replay of Pink Lloyd’s feat, he heard a fan shout a question: “Would he take him to the Breeders’ Cup?” Match him up with the world’s best, such as Roy H, XY Jet, perhaps Met Mile winner, Mitole, and maybe Do Share, the sprinter with the highest Beyer so far this season at 127? (Pink Lloyd posted a 100 Beyer in the Vigil.)

It’s not realistic, Tiller said later. Stakes fees and expenses would add up to $280,000  for a trip to Santa Anita in California in November. That’s a big chunk out of Pink Lloyd’s earnings. And besides, what track could give Pink Lloyd his rubber-lined stall, to prevent him from hurting himself? Pink Lloyd’s success may come from familiar environments at home.

So how would he stack up against the best? “We’ll probably never know,” Tiller said.

Still, this season, Pink Lloyd appears so far ahead of his peers. Tiller has never won so many races with a horse. He doesn’t think Pink Lloyd is finished yet.

“I know it can be over like that,” Tiller said. “But I like to think we’ve got more to come. The rest of the story may be out there.