Imagine meeting up with a cooler guy, called Jack Frost in Canada. What are the chances, right? Canadians know all about Jack Frost. But perhaps not this Jack Frost.

He was a buddy of Mike Nosowenko, a hard-working General Motors worker in Oshawa, and he indirectly led him down a path that has taken the auto employee to the Queen’s Plate on Saturday at Woodbine. He’s now 79. And he’s waited a long time.

This Jack Frost warmed up Nosowenko’s heart when it came to horses. At first he started getting interested in handicapping, listening for Daryl Wells’ race call, and betting on those ponies.

Then, he bought into a broodmare called Brief Star.

Those were heady and very new days in the history of Woodbine. The first horse that Nosowenko and friends bred Brief Star to was Northern Dancer. At the time, before the 1964 Kentucky Derby winner became a stallion sensation, it was easy to get to him. He met his paramours near Oshawa at the National Stud before moving stateside.

Good choice. Brief Star begat Brief Bikini, which was stakes placed. What’s not to love about this business?

From then on, Nosowenko always had a couple of mares with foals every year. He started out small-scale. When (our) Jack Frost got out of the business, Nosowenko took over. And he got a farm in Bowmanville, Ont., where he tended to his horses. His son, Nick, couldn’t help but be swept into it all. When it all started, he was four or five. Now he’s 56 and the trainer of Cooler Mike, a big, powerful 30 to 1 shot in a $1-million race.

The young Nosowenko started shovelling out stalls for his father. Somehow this fostered a love. When he was 16, Nick wanted only one gift: to get involved with the racing business.

The horses weren’t a full-time pursuit for Nick, who went to Centennial College and graduated with papers saying he could run restaurants and catering businesses. He bought into franchises for Casey’s and East Side Marios. Three times running, he was honoured as top franchisee. His restaurant businesses provided the fuel for his passion, horse racing.

There has been a learning curve, for sure. He started with his own horses, so didn’t have to please owners in the beginning. (Now he has three, although his father is his main client.) It got to the point where he went to the sales, and got rather good at going through the books and picking horses that had fallen through the cracks. Then he put a cast of Humpty Dumptys together again.

He also had Raging Star, a cheap little horse that he got “for pretty well nothing” and no wonder. He had foundered in both front feet. That’s not a case for long life. Yet Nick patched him up, got him going. He turned him from a horse that couldn’t beat a squirrel after a nut, into a running machine that eventually won the claiming horse of the year award at Woodbine a few years back. “I still have the clock,” Nick said.

He makes it all happen because he’s a hands-on trainer with his own livelihood invested.

Cooler Mike was born into this family affair. The Nosowenkos bred a speedy Bold Executive mare to Giant Gizmo, hoping to create an animal that ran further. He was the last horse that he and his father bred together. They gave the mare to someone else.

Cooler Mike was always special to them. He’s so special that he is named after his part-owner, Mike. When Mike got into the owning business, he made it a tradition to take back a cooler full of beer and wine for the barn staff after the races. If they won, it was cause for celebration. If they lost, they’d commiserate together and say, well, sorry, we lost.

It was a special cooler, red in colour. It was used only for this purpose. If the Nosowenkos wanted to go on a picnic, they’d take another cooler. The red cooler was ear-marked for racetrack duty. The most special of all coolers.

The remarkable thing is, it’s still in use. It must be more than 50 years old. “If that cooler could talk, what a tale it could tell,” Mike said.

As for Cooler Mike (the horse), he was a handful as a baby. When he grew into a yearling, he began to get tough to approach, tough to shoe. It came time to break him to saddle and bridle and all the rest, but the Nosowenkos got a call from the handlers attempting it, and they said: “We’ve got to geld this horse. He’s not focused. He’s too tough to handle.”

So Cooler Mike lost his power to reproduce. His attitude has improved markedly. He’s settled down. He’s become a barn favourite.

The Nosowenkos offered up Cooler Mike in the annual CTHS yearling sale in September of 2015 and put a reserve of $58,000 on him. After all, he was a big strapping animal. The gavel came down at $60,000. Nick ran upstairs at the sales arena to see who had purchased him, but when it came time to sign for him, the buyer refused.

Not sold, after all. Suddenly, the auctioneers stopped the bidding on the next horse, but Mike the horse had already gone back to the barn. They started the bidding on him again. “What just happened here?” Nick thought.

Nobody bid on him. The Nosowenkos had to buy him back. It wasn’t all bad.

“We were okay to take him back because he was that kind of horse,” Nick said. “You hear a lot of stories about how things work out. In this situation, it did.”

Cooler Mike earned $124,250 as a 2-year-old, finishing a close second in the Simcoe Stakes (Nick figures he was a little green) and fourth in three major sakes, the Cup and Saucer Stakes, the Coronation Futurity and the Kingarvie Stakes. “He was right there at every start,” Nick said. “He ran some tough races against the best in Canada.”

In the Coronation, he spent his time goofing around, and looking around and laying in on horses. “He still wasn’t focused,” Nick said. “I don’t think we finally figured him out until his last race when we put the blinkers on him, because he’s always been gawking at horses and trying to run up to them and lay in on them. We thought it was baby issues, but it’s more aggressive issues. He still maybe thinks he’s a stallion [or wishing he was.] When a horse would get in front of him, he’d just want to lean on him.” 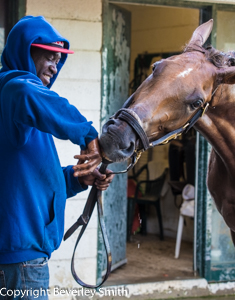 The blinkers seem to have solved that problem. He’s more focused now. He won his final start while setting all the pace – the Nosowenkos hadn’t quite expected that. But the blinkers perhaps put more of a speed dimension to him.

This season, Cooler Mike has grown into a big boy, standing 16.3 hands with never an ache or pain. He eats out the bottom of his feed tub. “He’s a perfect horse right now,” Nick said. “It’s a nice way to run.”

Cooler Mike hasn’t raced since May 20 and has two starts only under his belt this season. The Nosowenkos skipped the Plate Trial because they wanted to wait and see if anybody stepped up to run a fast time and win by many. Nobody really did, Nick said. “They all seem to be on an equal footing. And a heat wave is coming. It might be to our advantage that he is not over-raced.”

The Nosowenkos had started only one other horse in the Plate: Rackman, an Ontario-sired colt and well, there’s a story behind that name too. On a family trip to Las Vegas one time, when Mike was riding the elevator to the hotel room, the elevator opened, and Nick saw him standing there with racks of dollar coins. “Rackman, where have you been?” he said to his father. They saved the name for one of their horses.

Rackman the horse got them all excited when he won a maiden race in 2013, and thoughts of Queen’s Plate danced in their heads. “In hindsight, we probably shouldn’t have done it because he wasn’t seasoned enough,” Nick said.

Rackman finished last of 12 in the year that Midnight Aria won the Plate as a longshot. Rackman stalked the pace, then tired. 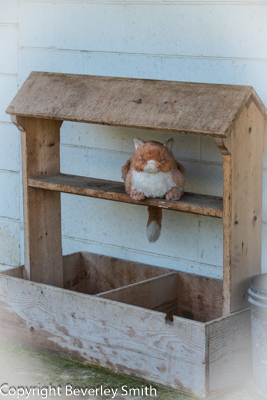 Rackman is a half-brother to Cooler Mike. But Cooler Mike is a different story. He’s already run against the best of his crop. And he’s running under the radar. He’s had some good, improving works, always working alone. “It might be a little scary if we did to see what he could have done, but hopefully, he’s fit enough and good enough,” Nick said. “It’s not like we’re out of our element.”

Nick says he doesn’t feel pressure about having a Queen’s Plate horse. He gets more worked up inside just sending horses out to train. The other day, a horse buzzed past Cooler Mike on the track and the big gelding took off after him. “He got some dirt in his face and he was bucking out there, trying to throw the rider,” Nick groaned. “But I know we’re in good order. But right now, I’m not worried about anything with him.”

Watching all of this from the cheap seats is the Cat With No Name, the rather fluffy barn mascot, sitting in a little wooden structure beside the barn. “We don’t talk to her much,” Nick said. “She’s just sitting there on the prowl. Janet, our hotwalker, will come in and she will say: ‘We had a bad weekend, boss. I’m turning the cat around.’”