There once was a horse called Ratface Macdougall. A well-loved horse, despite the name. He’s a bit quirky. Of course he is. And he is a horse that blossomed under the care of owner-breeder-trainer Angus Buntain.

So who is Angus Buntain, you might ask? Well, he’s the guy who trains Ratface Macdougall. In only his fourth year as a trainer (he had been part of the corporate world before switching careers.), Buntain has a few stalls on the very dusty backside of Woodbine, where the barns have no trees to shade the environs. And that’s where Ratface started his life as a racehorse. And Ratface made Buntain rather famous in this collection of barns and deep ditches and slanting morning sunrays.

On the days that he races, you can hear people in the stands yelling: “Ratface this, Ratface that,” Buntain said.

Ratface Macdougall’s nickname on the shedrow was simply Rat. “That’s generally a derogatory term for a horse,” Buntain said. “If you say: ‘Come on Rat, let’s go to the track,’ people look at you like you are treating your horse bad. But really, it was his nickname. The Rat.”

And lest people assume The Rat would be as ugly as sin, with lop ears and long nose, and buck teeth, well think again. This sporty Ratface Macdougall has a pert nose, with a little heart nestled on his forehead, and when he sticks his ears up, he looks rather sweet. (“However, when he shows you the teeth coming at you trying to bite you, he does look a little bit like a rat,” Buntain confessed.) 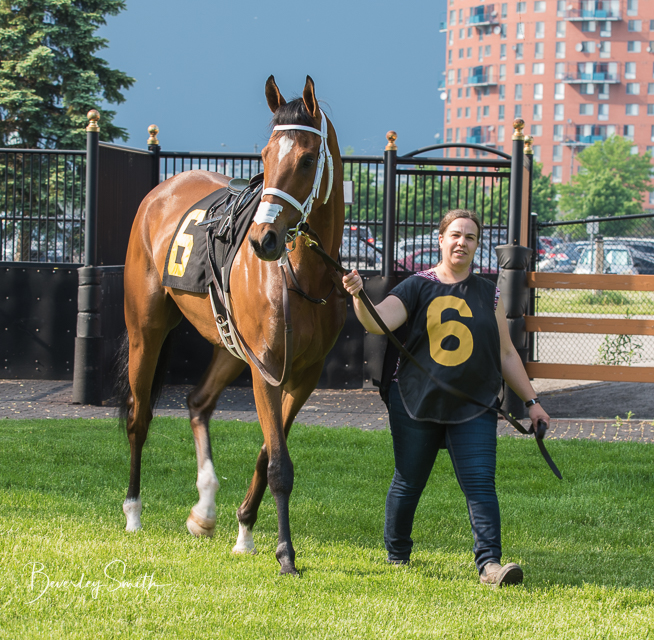 Last season, Ratface became a Woodbine sensation, not in sniffing distance of Pink Lloyd, but he carved out his own spot in the sun. The homebred started 11 times, and won three, finished second in two, and third in another two. In other words, he finished off the board in only four races, racing in optional claimers. If he didn’t win, he was always in the mix.

“Last year, he just blossomed,” Buntain said. “In the [previous] winter, he got bigger and stronger. Truth is, he was just able to carry his speed a lot better. He has wild speed. Once he turned four, he was able to carry it further.”

Buntain also put jockey Jeffrey Alderson on the horse for the entire year. He figures that was a big reason for the horse’s success, too. “Jeff got to know him really well,” he said. “Horse and rider trusted each other and had confidence in each other.

“So of course, he finished off the year with a big win in open allowance company. That was very exciting for me. I had never trained the winner of an open allowance. He’s my first winner of a big race like that.”

That was enough to burst Buntain’s buttons. Buntain and his father, Derek, had owned a few horses, at one time as many as four or five with another trainer. As time went on, they sold a bunch. But they kept this mare called Plantana that had never raced, having been injured in her final workout before her first start. They decided to turn her into a broodmare. Ratface was her first. They had bred her to Rebellion, which had been an Ontario sire at one point. The Buntains just wanted a horse to race as an Ontario-sired steed, with all of the bonuses that offers.

There have been other strapping offspring since, all of them carrying imaginative names. Ratface has a half-brother called Nupogodi, a 4-year-old that has already won twice this year. Nupogodi is named after a Russian cartoon character, a wolf in fact. In Russian it means something like: “Well, just you wait!” As good a name as any for a racehorse. He’s by Kentucky Bear.

Another Plantana offspring is 3-year-old Mizuchi, named after a Japanese water dragon. “I just liked the way it sounded,” Buntain said.

Next in line is Krackenwagen, named by Buntain’s daughter, Libby. He’s by Head Chopper, so Buntain asked Libby to give the colt a strong name. Her favourite ride at Canada’s Wonderland is the bumper cars and that ride is called Krackenwagen. “How about Krackenwagen?” she said. “It sounds like cracking heads!”

When it came time to put a name on Plantana’s first son, the Buntains were at a bit of a loss. But inspiration came when father and son were off on a fishing trip in northern New Brunswick.

They visited a bait and tackle shop there, peering into the big glass displays housing various salmon fishing flies. (Ever heard of a Humpy Brown?)  One caught Buntain’s eye. He pointed to it and asked the shopkeeper: “What’s THAT?”

The shopkeep drew a long breath and gasped: “THAT’s a Ratface Macdougall!”

Buntain and his father looked at each other, both with smiles spreading and thought: “That’s it!”

“Timing is everything,” Buntain said.

In case anyone needs to know, the Ratface Macdougall was invented by Catskills fisherman Harry Darbee, who originally named the concoction of deer hair and grizzly hackle the Beaverkill Bastard. But when a young female visitor once asked him the name of the fly he was tying, Darbee’s face reddened and he asked her to name the fly. And that’s what her imaginative mind came up with. Ratface the horse could have been called something quite different, but for her.

So the horse is not named after some kind of gangster or mob boss, as some think.

“We just thought the name was catchy and fun and people would like it,” Buntain said. “As it turns out, he really is quite a fan favourite, due to the name and all. He’s not a stakes horse or anything, but he’s a very good horse. And the way he runs his races, he’s in the lead, so his name gets said a lot by the announcer. I think that helped create his fan base.” 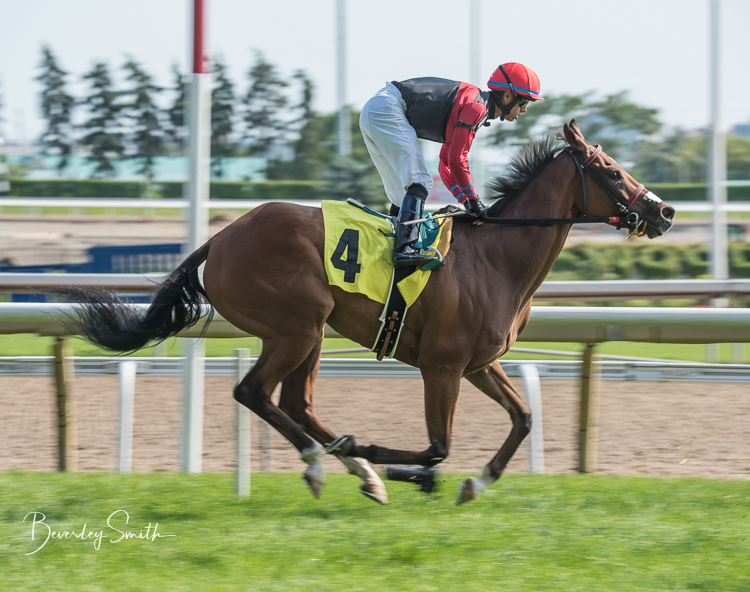 Back in the barn, he paws a lot. “He thinks he’s god’s gift,” Buntain said. “He’s very spoiled. He’s not cuddly. He bites.

“But he has heart and that’s one thing you can really appreciate in a racehorse. He’s a horse that just tries his guts out. He doesn’t always win, but he’ll give you 110 per cent. That’s all any trainer can really ask for. If he wins, great. If not, that’s okay too, as long as they try their best.”

Meanwhile, back at home, Libby, who was 11 years old when Ratface made his first start, unearthed a big angry-looking rat that she got for a Halloween decoration one time and began bringing along it as a mascot to the track. “It’s the scariest looking thing,” Buntain said. “I can’t believe she liked it.

“Right from age three, she coddled it like a kitten, and so she brought it to the races on Sept. 17, 2016 that day and of course Ratface won. So we had to have the fancy photo in the winner’s circle with the jockey [Gerry Olguin] and everything.” 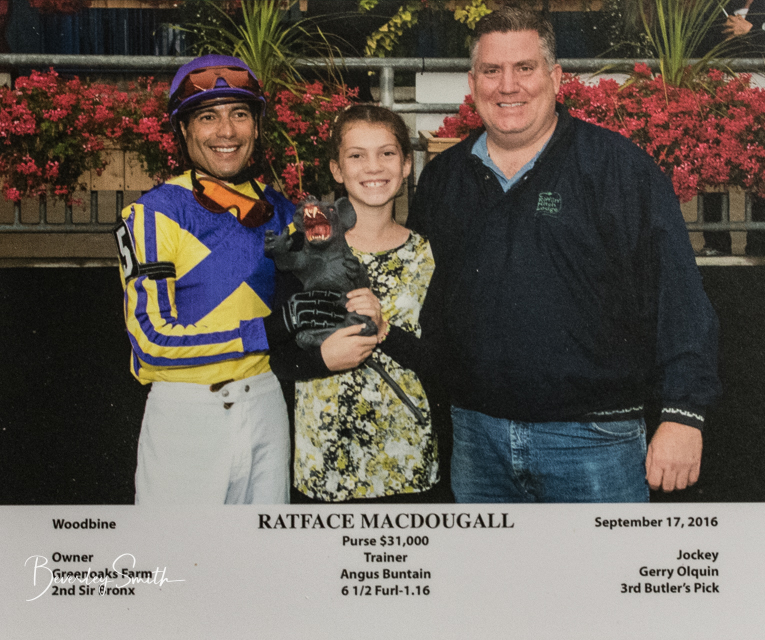 The rat made an appearance at all of his races after that. “Because every time he did win, she was in the winner’s circle with him,” Buntain said. “And they would put it up on the jumbotron. A lot of people would say: “Oh, did you see that little girl with the giant rat in the winner’s circle? Isn’t that great?’

“Racing is a serious business, but sometimes you’ve got to have a little bit of fun with it as well. For us, the horse has been a lot of fun, with the mascot and all. He’s made me kind of a little more famous as well.”

Last spring, Buntain had Ratface Macdougall back in his barn at Woodbine for two days when Cory Hoffman – with Stephen Chesney, the owners of the claimer-turned-stakes-winner Melmich – came knocking. They had approached Katerina Vassilieva (of Big Bazinga fame) to train some horses for them and they wanted to buy some new horses. They all liked Ratface because of his consistent form and his hard-trying ways.

Buntain was taken aback with the offer. He hadn’t even thought of selling the horse. The thought hadn’t crossed his mind at all.

“Well, all my horses are for sale,” Buntain blurted, reason having settled on his brow.

Hoffman gave him a number. “You are speaking my language,” Buntain said. The deal was done the next day. Ratface walked over to Vassilieva’s barn, which isn’t far away.

Buntain looked at Hoffman from under his eyebrows. “There’s a second part to the horse,” he said. “He has a lucky mascot.”

Hoffman was well aware of the mascot. Buntain told him he had asked his daughter how much it would cost Hoffman to wrestle the mascot from her.

“One hundred thousand dollars,” Buntain said with a twinkle.

They both laughed. “I think we’ll take our chances without the mascot, for now,” Hoffman said.

That was in March.

Libby didn’t take the sale of Ratface so easily. Not well at all. She started to cry. Buntain felt the tears welling in his eyes. And then his daughter really made him cry when she said: “I understand it’s a business, but I was just really attached to him and I’m really going to miss him.”

“But it’s still sad to see him go,” Buntain said during the spring. “It was hard for me to watch him walk out of the barn. When they led him away, well, I’ve never sold a good horse before. That was difficult for sure.”

And it still hurt to see Ratface wearing Vassilieva’s blue and gold. “To me, it doesn’t look right. He should be in purple and gold [Buntain’s colours],” he said.

But he wished all of Ratface’s new owners and trainer the best with him. “I still have the mare,” he said. “And I get the breeders’ awards.”

Buntain told the new owners everything he knew about the horse. “We’re cheering for him every time he runs,” Buntain said. “We cheer hard. I’d like to see him win. That would be wonderful. They are nice people.

“He was a real thrill to train. The barn is different without him.” 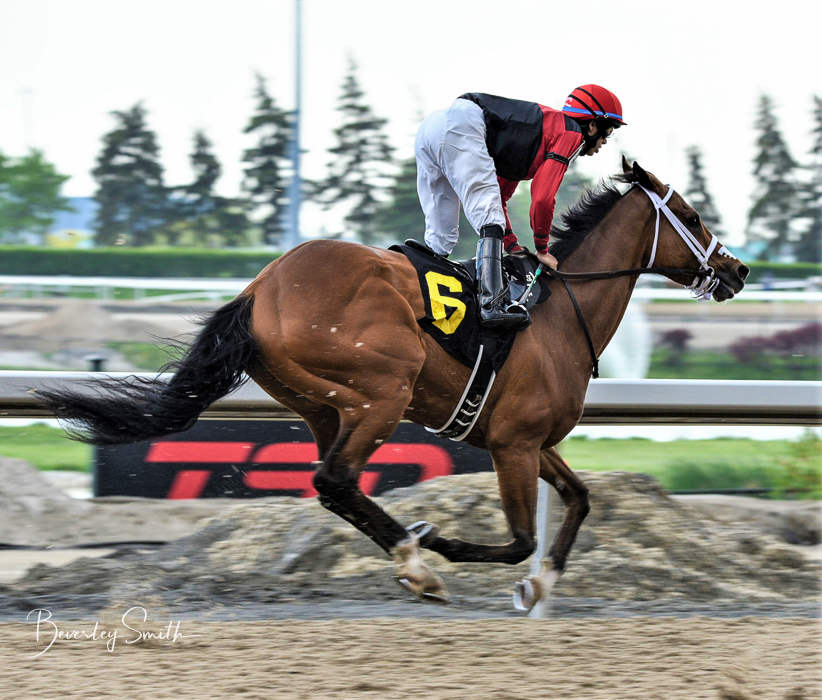 He told Vassilieva that training Ratface Macdougall came with a lot of pressure. “You have to deal with the media and the fan love,” he told her.

A few weeks later, she told Buntain: “There’s a lot of people that know this horse and like this horse!”

The horse’s name even sparked a conversation at a cocktail party, Vassilieva said.

“People come up to me all the time and say gosh, I love that horse and his name,” she said. “They say: ‘I bet him just because of his name.’”

But without his family, Ratface seemed lost. He started three times this season and finished at the back of the pack each time, tired, lacking a rally. Hearts broke everywhere.

Two months ago, Ratface came home, back to Buntain’s barn as his new owners sought to recreate his magic. Although Buntain is no longer the owner, he is now again the trainer of the horse with the adventurous teeth.

“He absolutely knows he’s back home,” Buntain said. “He’s settled right in. He’s not nervous any more. He’s eating like crazy. He’s put on some weight and he’s looking good and he’s happy. He loves our program and he’s out first every day. He loves it.”

“We missed him a lot,” Libby said. “We were really excited to get him back.” The rat mascot has been unearthed, out of mothballs, ready for action.

Ratface Macdougall’s homecoming is the Woodbine backstretch answer to Lassie Come Home, to Dorothy in The Wizard of Oz clicking those ruby red slippers, to that little extra-terrestrial creature called E.T., to the wandering fish Nemo. There was a happy ending to those stories. But the Buntains are all hoping the legend of Ratface Macdougall doesn’t end here.