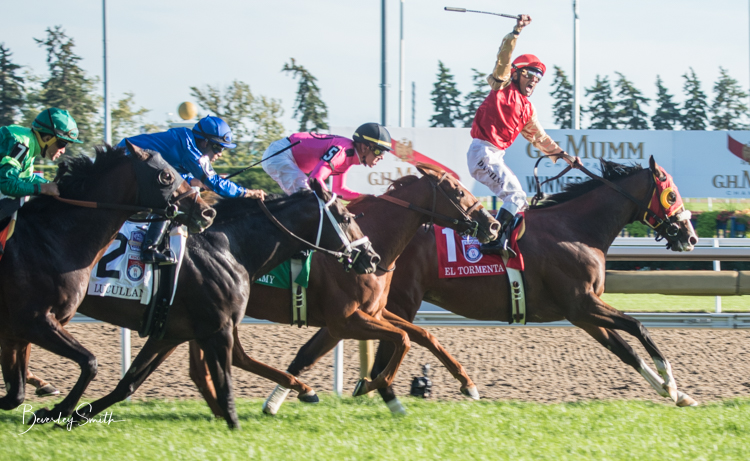 Eurico Rosa da Silva knew time was running out, like sand in an hourglass.

With three months left in his riding career, there was but one stakes race at Woodbine that he had never won. He had won two Queen’s Plates, and the Canadian International Championship Stakes two years ago on 43 to 1 shot, Bullard’s Alley, in a race dominated by non-local jockeys.

But the one Da Silva hadn’t snared was a big one: that $1-million Woodbine Mile. He had been second twice, on Mr. Havercamp last year and on Tower of Texas in 2016. Close but not quite there. He had only one chance left – on Saturday Sept. 14 at Woodbine. He won’t be in the lineup next year. He’s retiring at the end of the year to spend time with wife and children after being a jockey for 30 years.

All of Da Silva’s marbles were on El Tormenta, a powerful, lightly raced 4-year-old that had only three wins to his credit and a history – at least this season – of being blocked by a wall of horses in the homestretch and never getting out in time. But Da Silva had been watching this robust Sam-Son Farm colt for a long time. Other riders got the mount. Then just before the Woodbine Mile, Da Silva’s agent, Tom Patton, got a call from Gail Cox, trainer of El Tormenta, asking if the Brazilian-born rider would like to partner El Tormenta in THE MILE.

Patton asked Da Silva what he thought about the idea.

“Tom, please!,” Da Silva said. “Just close your eyes this time. I want to ride this horse. This is the horse I want to be on.”

Da Silva leaves the decisions up to Patton. But Patton accepted. And for the first time, Da Silva rode El Tormenta (meaning The Storm in Spanish) in his last Woodbine Mile.

El Tormenta went off as a 44.70 to 1 shot, despite his stunning win in the Connaught Cup last June. “I thought he was a little overlooked,” Cox said. He was the fourth longest shot on the board in the 11-horse field.

And guess what? He drew post one, increasing the chance that he would find himself blocked on the rail during the mile race. And he was. El Tormenta hugged the rail in fifth down the backstretch. Round the final turn they went, and El Tormenta was tormented, behind a wall of horses, and the race favourite, Got Stormy, had flown to the front.

Cox sighed a silent sigh as she watched. “I was just hoping he had room to run there,” she said. “I just wanted him to have a little space because he’s pretty tough, and he’ll bully his way through.”

He did just that to win the Connaught Cup, but too much bullying can get you disqualified.

“When we turned home, I have lots of horse,” Da Silva said. And in the blink of an eye, after a shuffle for positions happened as horses readied their final charge, El Tormenta came off the rail and found a sliver of light. Da Silva pointed him to it. “He just took off from there,” the jockey said. “He gave me everything he had.”

He flew down the stretch, grinding his way past Got Stormy and never letting her by. And suddenly Da Rosa realized that no other horse was in front of him. He could not believe that he was in front at the wire.

“He [El Tormenta] is tough as nails,” Cox said. “He’s very very competitive. He doesn’t give up. In some of the other races, having a poor trip, being yanked back and being yanked around, he always would run at the end.” He won by half a length over the filly and in doing so, got a Win-and-you’re-In ticket to the Breeders Cup Mile at Santa Anita Park in California Nov. 2.

Michael Balaz, grandson of Ernie Samuel, who founded Sam-Son Farm 47 years ago in 1972, watched the drama unfold and said: “There wasn’t a lot of thinking. There was a lot of yelling.”

The yelling and screaming down a stretch is a Sam-Son tradition. Samuel always had healthy lungs for such things. Ernie passed the torch to daughter Tammy, who died at 47, but the family stable keeps humming, with about 110 horses, including retirees. They breed 25 broodmares every year and race most of them.

El Tormenta is a homebred.

It’s been a good, emotional year for Sam-Son Farm, which also won the Woodbine Oaks with Desert Ride. “It’s really special,” Balaz said. ”When we were lucky enough to win the Woodbine Oaks, I got all sentimental and I teared up because the granddam of that horse [Eye of the Sphinx] was a horse that was so special to my mother. The great granddam [Queen of Egypt] was one that was so special to my grandmother. And the granddam was the last one to win the Oaks. It’s just all these connections that can be kind of overwhelming at times.

“But this is a new connection.”

After Da Silva won that elusive Mile, he threw his first in the air as he rode the horse back in front of the grandstand, again and again and again, yelling all the way. Da Silva exulted in a similar way when he won the Canadian International. But this celebrating went to a new level. After the winner’s circle ceremonies, and heading back to the jock’s room, Da Silva hopped and cheered and slapped hands with fans on the way.

“These people have supported me for 15 years,” he said.

The Balaz family (Michael’s father is Rick Balaz, president of Sam-Son Farm) will get together to make a decision on whether El Tormenta will take the fees-paid trip to the Breeders’ Cup. Cox says he’s an easy horse to deal with and ships well. What are the odds? “I don’t see why not after running like that,” Michael Balaz said.

In other words, Sam-Son has won the Woodbine Mile with the two longest shots in the race. Never say die when you don the red and gold.