When Canada finally allowed international travelers back into the country, picking its way through the COVID mess, some horse racing floodgates opened and in washed Frankie Dettori.

For the past two days, the Italian-born jockey, based in the UK, has livened up the place.

The timing couldn’t have been better for the 50-year-old rider to re-acquaint himself with Woodbine. He won three Grade One races on Saturday and Sunday, and made his famous flying dismount from two of then. The third, a 2-year-old filly, called Wild Beauty, who ran off with the $401,600 Natalma Stakes, was a bit of a diva, constantly throwing a hind leg at nobody in particular in the winner’s circle. (She’s allowed. She’s a daughter of Frankel.) Making a statement, she was. So Dettori thought it best to just roll out of the saddle like everybody else.

That flying dismount? Dettori launches himself out of the saddle – no hands – flies high above the horse’s back and lands on two feet. Dettori has admitted he has been made a slave of it. If he doesn’t do it at home, he may get booed. He says that he was first exposed to the thing when as a young rider, he spent some time in the United States, and saw Angel Cordero Jr. do it. So he copied it. And now it’s his trademark.

But wait a minute. He has come to Woodbine, home of Avelino Gomez, the personality-plus Cuban-born jockey who died after a racing accident in the 1980 Canadian Oaks. And for years since, the Avelino Gomez Award has been handed to a Canadian jockey who has contributed to the national racing landscape, much in the way Gomez did. But there was only one Gomez.

It just so happened that the Gomez award was handed out on Sunday, just before Dettori made a flying leap from Albahr, the British-bred winner of the $404,400 Summer Stakes. The trophy, a replica of the huge Gomez statue that overlooks the walking ring, was given to now-retired champion jock, Eurico Rosa da Silva, who looks as if he could still make weight.

Rosa da Silva never met Gomez of course. But he’s heard so much about the guy who used to clown around with the fans, whether they applauded him or booed him. El Perfecto, they called him. He won every major race in Canada and was North America’s leading jockey in 1966. He performed for the crowd, so Rosa da Silva thought he would, too.

But one of Gomez’s lasting legacies was his flying dismount from a horse. He did it long before Cordero or Dettori even thought about it. They have made it famous – but it was already famous here. And it was pure Gomey. He would wear an impish grin when he did it.

In a way, Dettori has brought it home.

He fired off one of those dismounts after he won the 83rd running of the $600,000 Canadian International Championship Stakes on Saturday (Sorry, Frankie, it used to have a $1-million purse, but COVID….you know.)  He rode 7-year-old gelding Walton Street, who has raced in Dubai, England, even Berlin with great consistency. The 1 ½-mile distance seemed to be his specialty.

Walton Street overhauled brave local pacesetter Primo Touch, trained by Harold Ladouceur in the stretch to win quite easily by 5 3/4 lengths, denying the 9-year-old Desert Encounter his third International win. (He had won in 2018 and 2019. There was no International in 2020.)

For Dettori, it was his fourth International win, having scored with Mutafaveq in 2000, Sulamani in 2004 and Joshua Tree in 2010.

“Frankie has his game plan and turning in, he always knew he was going to kick on,” said Charlie Appleby assistant Alex Merriman.

The marvel of the race was Primo Touch, who had raced only eight days before in a Woodbine allowance race. And he tackled this event, with horses from England, Ireland, United States, and why not throw in an Argentine-bred one?

Primo Touch, under Daisuke Fukumoto, zipped to the front and had a 3 ½ length lead by the quarter in 25 seconds, and he just widened it. Led by five lengths to the half in 49.49 seconds, and was still in front by four at the mile mark in 1:40.49. He still hung on for third, in the end. A 41 to 1 shot, he finished ahead of English Conqueror and Belichick, who had both defeated him in the Singspiel Stakes at Woodbine.

Walton Street won in 2:29.07 over a turf course rated “good.” And then came the flying leap.

Dettori had no time to chat, because he had to run off to ride the magnificent-looking Rushing Bull in the $1-million Woodbine Mile. Rushing Bull prepared by walking the walking ring well before the others stepped in, and was saddled in an enclosure. The Chad Brown-trained 6-year-old was placed third in the Mile last year after another horse was disqualified for interference.

But nobody was a match for another local upstart, Town Cruise, who, like Primo Touch, set the pace, but he could not be caught. More on him later.

Raging Bull finished third (again) as the 7 to 2 second choice. The 9 to 5 favourite Set Piece, winner of the Wise Dan Stakes this year, finished only seventh.

On Sunday, Dettori swept both of the Breeders’ Cup Win and You’re In races for 2-year-olds at Woodbine, with Wild Beauty and Albahr. They both have expense-paid trips to the Breeders’ Cup at Del Mar Racetrack in California in November for owners: Godolphin, who has in the past been a regular customer for Dettori. (Dettori might be best known as the pilot of the wondrous mare Enable, who he called “the ultimate Ferrari.” She was trained by John Gosden.)

Both youngsters had slow starts. Wild Beauty hopped out of the gate, was squeezed and shuffled back to last as Mark Casse’s Cardio Princess took the lead, chased by a couple of longshot. Celebrity chef Bobby Flay had an entrant in this event, his homebred Pizza Bianca, second choice at 3 to 1, who settled into fifth place early.

But Dettori and Wild Beauty picked off horses one by one and steamed past them all to win by 2 ½ lengths in 1:35.08. Pizza Bianca was second, while Eminent Victor made a late bid to finish third.

Dettori said although the filly stumbled, the quick pace that was set by others played into his hands. “They went way too fast and by the time we got to the quarter pole, it all just fell into my lap,” he said.

The daughter of Frankel won impressively, but Dettori said if she does go to Del Mar, the luck of the draw is important. Woodbine has a very long stretch. Del Mar, not so much. “The straight is half the size of this, so you need all the luck,” he said. “She’s definitely good enough to take part.”

Both Wild Beauty and Albahr kicked on after slow starts in the European style. Albahr won the Summer Stakes for colts by 2 ¼ lengths after a slow break. He settled into a trailing position, letting Harlequin Farms’ First Empire, set the pace. But Albahr swept past him to win in 1:35.77. Albahr was no surprise to anybody, bet down to 3 to 5 after having won three of four starts in England. Now he’s won four straight.

No matter what, Dettori was still cheered as he ran through the crowd back to the jock’s room. He signed autographs, took some selfies. He’s a jockey who is a celebrity.  Believe it or not, the guy who works to maintain weight, has a line of frozen food, and a spate of Italian restaurants. One in Dubai. Hope they are all still running. 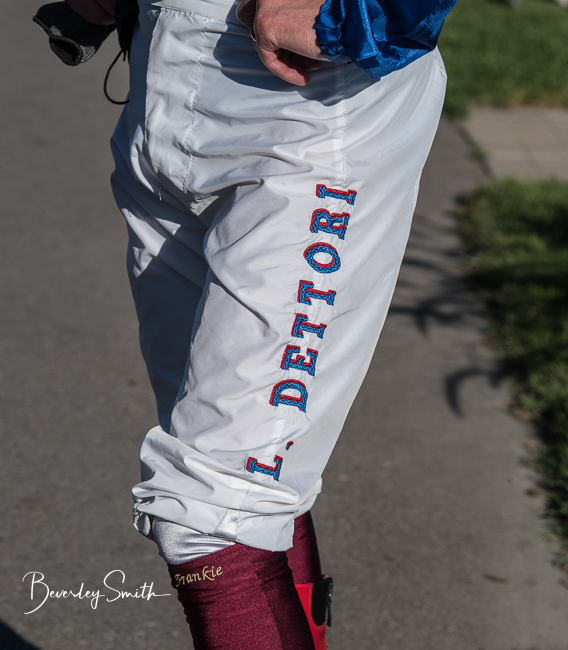 After his final race of the weekend, Dettorri actually opened the bottle of wine traditionally given to winners (nobody has done this before) and sprayed all of the media photographers and cameras crowding for photos. Then he drank from it. No doubt, he’s got a little Avelino Gomez in him. He has come to the right place.