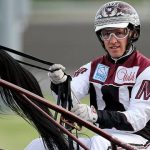 You listen to the chatter of all those who have known him and you get the idea that Doug McNair was born on a race bike, with a whip curled over his arm. It’s not far from the truth. He comes from that Canadian nest that spawned some of the best harness racing drivers in the world: Herve Filion, John Campbell, Bill O’Donnell, Ron Waples, and let’s not forget Keith Waples, … END_OF_DOCUMENT_TOKEN_TO_BE_REPLACED