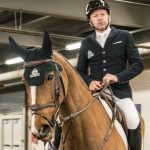 Eric Lamaze considers himself lucky, even though his life reads like a tragic novel and he’s currently undergoing intense treatment for a brain tumour. He says although his future is uncertain, he’s making plans. This past weekend, he says he will put all of his energy toward competing at the Tokyo Olympics next summer. And then step aside from the … END_OF_DOCUMENT_TOKEN_TO_BE_REPLACED