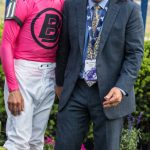 It’s Wonder Ga-DOT, people. Not Wonder Ga-DOUGH, as so trippingly falls off the tongues of those Canadian folk who think in bilingual terms. Now you’ll all have to remember the name of Wonder Gadot, because the imposing 3-year-old filly just became the 37th filly to win the Queen’s Plate against the boys over the past 159 years, (and the ninth since Woodbine opened in 1956.) … END_OF_DOCUMENT_TOKEN_TO_BE_REPLACED