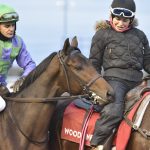 This is a milestone year for the Queen’s Plate: it’s the 160th running, so many years from the first, won by Don Juan. Don Juan had to run three heats to win it and defeat seven others in Toronto, which at the time had a population of 44,425. This time, there are 14 horses, and it’s one dash for $1-million in front as the crowd tries to muster up the Royal Ascot flavour. … END_OF_DOCUMENT_TOKEN_TO_BE_REPLACED