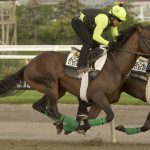 Why not? Take a chance. Flip a coin. Roll the dice. Listen to your innerds. That’s as good a reason as any to enter a horse in the 162nd Queen’s Plate, to be held at Woodbine, in a year unlike any other year. Thirteen entered the $1-million classic on Wednesday. (We’ll see if this is a lucky number when the race is run on Sunday.)  Of this lot, two are maidens, … END_OF_DOCUMENT_TOKEN_TO_BE_REPLACED 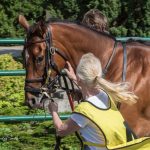 It's July and it's time for the 2-year-olds to surface. And the older horses start making their mark, race by race. Here are a few of my favourite things on a summer Sunday:           … END_OF_DOCUMENT_TOKEN_TO_BE_REPLACED

If Dixie Moon were human, she would cast a side-eye to someone’s loud guffaw, tell her neighbours to behave, throw things at her detractors, and generally voice her opinion. So maybe she’s almost human. She just doesn’t need words to make her point. She’s quite eloquent, really, in her own way. Since she started racing for breeders Dorothy and Sean Fitzhenry and … END_OF_DOCUMENT_TOKEN_TO_BE_REPLACED