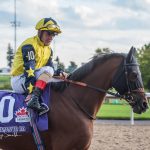 Strangely enough, two horses from England blossomed in the $800,000 Canadian International Championship Stakes in forboding conditions: a slate grey sky, thunderous clouds driven by a stiff, frigid wind, a capricious sun that didn’t warm anybody’s hearts. Irish-bred Desert Encounter and English-raced Thundering Blue drew away from the rest of the field in the stretch to … END_OF_DOCUMENT_TOKEN_TO_BE_REPLACED 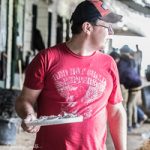 A day in the life of the Sylvain Pion stable: horses tuck into their hay; one called My Silent Present, rests her head, snoozing, against a large stuffed monkey hanging on the wall; a little mouse emerges, peeks into the darkness of a stall and retreats as the star of the stable, English Illusion, gets a haircut, as if he was going to the prom. And he is. … END_OF_DOCUMENT_TOKEN_TO_BE_REPLACED