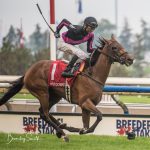 Trainer Barbara Minshall lauds the day that what was lost was found again. On Sunday, she won the 130th running of the Breeders Stakes with British Royalty, a horse she lost through the claiming ranks – but was able to get him back, and quickly. The thought that a horse with such a lofty name could find himself in a claiming race is one thing. But in this contracted … END_OF_DOCUMENT_TOKEN_TO_BE_REPLACED