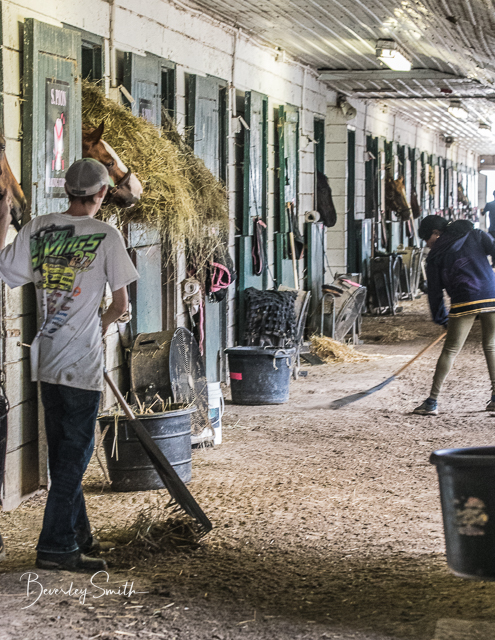 A day in the life of the Sylvain Pion stable: horses tuck into their hay; one called My Silent Present, rests her head, snoozing, against a large stuffed monkey hanging on the wall; a little mouse emerges, peeks into the darkness of a stall and retreats as the star of the stable, English Illusion, gets a haircut, as if he was going to the prom. 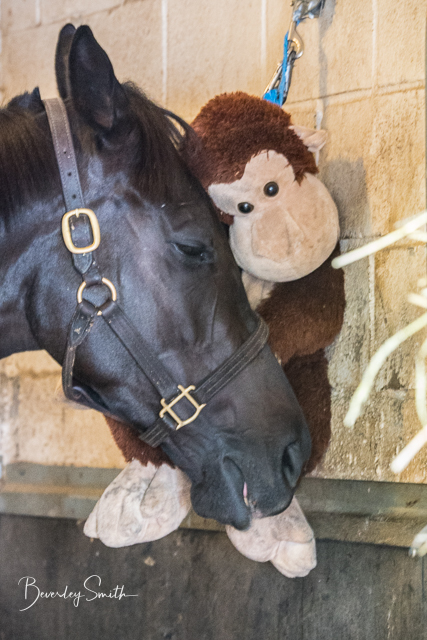 And he is. English Illusion will run in the $800,000 Grade 1 Canadian International Championship Stakes at Woodbine on Saturday, against an international field: Horses that have raced at the Curragh in Ireland, two horses from the from powerful Chad Brown Stable, top trainer by earnings in 2016 in North America; a German-bred horse that won the Group 1 Preis Von Europe with ease in Cologne Germany last month; a horse who spent his early days in Chantilly, France; a winner of the Stockholm Cup in Sweden. It’s all heady stuff.

Wait, so it’s not a normal day in the life of the Pion Stable. The previous day, at the draw for post positions for the International, Pion was beset by the paparazzi, all wanting to know his story and that of English Illusion, a horse he had claimed for $45,000 only two months ago. And here he was, going up against gangbusters. Suddenly Pion was attraction No. 1 at this draw party. And this was all new to him.

Still, Pion was born and bred to do this work. His father, Raymond, was a stalwart at Fort Erie racetrack, two of his father’s cousins toiled at tracks, his uncle was in the business, grandfathers too. Pion says his 75-year-old father works with him every day. “I wouldn’t be where I am if it wasn’t for him,” he said.

Pion’s son, Kristofer, was the groom for Pink Lloyd last year during his Horse of the Year season. And this season, the son, a fourth-generation horseman, has come home to work with the family again, just as the Pion stables fortunes began to rise. So far this season, Pion’s stable has won nine races of 44 starts, with six seconds and three thirds. Career-wise, he’s pushing $885,000 in earnings, with 29 career wins. Wins come hard in this game.

Kris, now 24, is a gentle giant at 6-foot-4 ½. He was a green groom when he started to care for Pink Lloyd. But he has a gift. “When he started with [Bob] Tiller, he worked hard to move up,” said his father. He’s a hard-working kid, very polite.  And he has very gentle hands. He’s not rough.”

And Kris has already discovered that English Illusion has a spot on his neck that he likes to have rubbed.  Nobody can forget the sight of Kris leading English Illusion into the walking ring before the Northern Dancer, cradling the 5-year-old gelding like fine bone china.

Pion calls this season a breakthrough year for the stable. He loves his distance turf horses and he already has one hot potato, Artistico, currently leading the Turf Endurance series at Woodbine by an insurmountable 20 points. Pion figured the only horse that could interrupt Artistico’s march to the winner’s circle was English Illusion. And then English Illusion went into a claiming race. Pion claimed him, with an eye toward the turf series.

But he ran him a few weeks later in the $100,000 Halton Stakes at Woodbine. And he won, defeating Johnny Bear, winner of the Grade 1 Northern Dancer Stakes last year. That shocked Pion. The new addition to his stable has more than made his money back in one race.

Well, this was all just beyond the pale for the humble Pion stable. And now they’ve taken the next upward step against even tougher horses. And by the way, Artistico  will race on Sunday in the Turf Endurance. His win in the series, aside from the purse money means a $25,000 bonus and $15,000 to Pion. If all goes well, It could be the best weekend in Pion’s career. 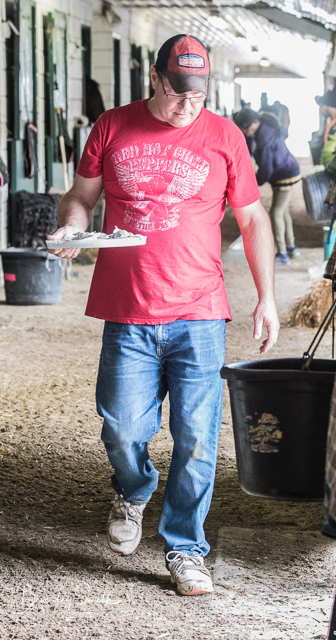 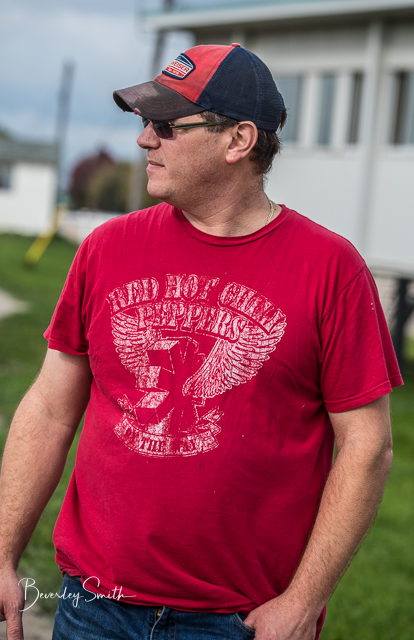 After decades at Fort Erie, Pion moved to Woodbine about five years ago. Pion worked for a couple of different trainers, one of them being Scott Fairlee. During that time, he met a group of people who would become future horse owners. Now they are called the 4U Thoroughbred Racing Stable Inc.

One of them, Rob Leuschner, a 25-year veteran at the Mississauga News, and Canwest in Vancouver, too, had been coming to the races at Woodbine just for fun with cousins Dave and Steve Robinson (Dave also worked for the Mississauga News for 30 years in advertising and distribution). They, along with Ron McRae, Dave’s father in law, eventually decided they would like to get into the ownership side of things.

Rob McRae, who had been born in Montreal, just happened to be sitting at a table in the Champions restaurant at Woodbine next to Terri Pion (wife of Sylvain), there with her mother. And they struck up a conversation in French.

The chance meeting has turned them into life-long friends.

After a few months of discussion, the group decided that they would get Sylvain Pion to be their trainer. They set out to claim a horse.

“We started at the low end,” Leuschner admitted. They bought a filly called Shifty privately for about $7,500 in December, 2014, just as Woodbine’s season was closing.

Shifty almost died over the winter of colic. “There was a very high risk of her dying,” Lueschner said. Their hearts sank.

“But Syl took care of her and got her better,” Lueschner said. Shifty made it to the track, but never won a race. “We moved on from Shifty pretty quick,” Leuschner said.

During their first year, they broke even. They had started out by buying cheap horses but quickly realized they needed horses of better quality. They did well the second year, thanks to Niigon’s Glory ($163,813), their top earner so far.

“Then we got excited and spent all the money the third year,” Dave Robinson said. They also owned Dixie Whistler ($110,336).

This is their fourth season together. Not only do they own Artistico – which they claimed last year – but they own English Illusion, too. “It’s been a lot of fun,” Leuschner said.

So on Saturday, English Illusion will take the stage, the pride of a small stable. “He’s a great dude,” Pion says of the chestnut son of English Channel. “He has no complications. He’s a lovely horse, easy to be around, willing.”

Perhaps English Illusion has excelled over the past two months, just because of a change of scenery. Perhaps it’s just his time. He’s one of 12 horses that Pion trains. “Fortunately the 12 horses have kept me too busy to think [about the International],” Pion said. “It’s been very surreal. Things picked up about two, three months ago. They picked up big time.

“I’m just riding a great wave right now and enjoying it, especially having my family with me all the time. It’s amazing.”