We’ve waited a long time for this 161st running of the Queen’s Plate, as in an extra three months or so, but finally we have the clues as to what it will look like. Aside from fences instead of spectators, sanitizer stations instead of Timbits, and barely familiar faces wrapped in all manner of masks, Woodbine and its premier $1-million race looks like a close contest.

The $500,000 Woodbine Oaks presented us with precocious winner Curlin’s Voyage, a “very very special” filly if there was one, according to trainer Josie Carroll, who has mapped out the chestnut’s career for the Hill n’ Dale Equine Holdings.

As she did with 2011 Plate winner Inglorious, Carroll is leaving us all guessing as to whether or not Curlin’s Voyage will try the boys in the Plate, or go off to find more fortune elsewhere. (Carroll admits she left everybody frustrated in 2011 when she didn’t make up her mind until a week before the Plate about Inglorious’s fate.) It’s not as if Curlin’s Voyage hasn’t run against males before: her first stakes start was the Victoria Stakes last year in which she finished second to the talented Mr. Hustle.

“I think we knew what we had from the start when we were very bold and put her against the boys the first time out in a stakes race,” Carroll said. “It’s not something you do lightly. You have to think one’s special.”

That being said, Curlin’s Voyage stopped the clock in the Oaks in 1:50.04, which was .57 seconds faster  than it took Clayton to win the $150,000 Plate Trial in a hard-fought three-way finish. Mind you, the first quarter in the Oaks was “pretty quick”  (23.15 seconds), said Curlin’s Voyage’s jock, Patrick Husbands, winning his fourth Oaks. That strung out the field a bit, but Rafael Hernandez was breathing down Husband’s back on both the first and second turns at the back of the field.

Vancouver filly Infinite Patience set the lively pace from her outside post, followed by 67 to 1 shot Bayou Belle while Curlin’s Voyage sat back in eighth at the rail. By the five-eighths pole, Husbands said he began to look for a hole. The heavens opened up, one hole at the three-eighths pole and then another at the quarter pole. Curlin’s Voyage slipped up the rail and won by 1 ¾ lengths, in complete control.

Curlin’s Voyage took the shortest way home. The amazing Afleet Katherine, who had only two previous races in her life under her belt – both wins – traveled 14 feet further than the winner to finish second at 4 to 1.

Carroll’s biggest headache was in wanting to get a two-turn race under Curlin’s Voyage’s belt before this 1 1/8-mile Oaks, and with the shortened racing schedule, just couldn’t. The Oaks winner finished second to the speedy Owlette at six furlongs in the Star Shoot, and then won the Fury by a head at seven furlongs earlier this season.

“I trained her fairly hard into this race,” Carroll said. “And she just thrived on it. Good horses thrive on training.”

Carroll said the good-natured Curlin’s Voyage (she likes to lick her human friends), will tell her what she should do.

Attard is holding a hot hand among young horses as the trainer of the highly regarded Clayton, who had run only three times in his life before the $150,000 Plate Trial, winning his most recent start by three lengths over Elusive Knight at Woodbine last month. The Plate Trial was his first stakes attempt, but he went off at 3 to 5 and justified his backers with a half-length win after breaking inward at the start, and being steadied by Woodbine’s leading jockey Rafael Hernandez.

(Attard’s uncle, Sid Attard, trained half of the entries in the six-horse field, finishing third with Dotted Line.)

Dotted Line set the pace, but both Clayton and second choice Halo Again caught him in the stretch and started a tooth and nail battle to the finish, with Halo Again second. Halo Again was bumped early, and lost little lustre as last year’s Coronation Futurity winner, and the winner of the seven-furlong Queenston Stakes in his last start. Those three may battle to the finish in the Plate as well.

Although Clayton took longer to win the Plate Trial than Curlin’s Voyage took to win the Oaks, Dotted Line set much slower fractions. Infinite Patience got to the half in the Oaks in 46.79 while Dotted Line had an easier time of it in 49.31.

“He looked like he was going to kick on like he did in his last race,” said Clayton’s trainer Kevin Attard. “And obviously they kind of kicked on with him and made it a good fight to the finish. So we’ll kind of watch the replay and see how he comes out of this race and take it from there. See if there’s any adjustments that need to be made.

“Obviously, this is just kind of one step in the right direction – but I don’t’ want to be remembered as the Plate Trial winner.”

Attard hasn’t won a Plate. It’s high on his list.

Hall of Fame trainer Bob Tiller could feel the weight of the lead pads he slid onto Pink Lloyd’s back on Saturday before the $140,750 Bold Venture Stakes: 128 pounds of sink. It was like slinging a bag of big bolts onto a living creature.

The 8-year-old sprinter gave seven pounds to his opponents on a steamy day at Woodbine. Pinkie, like many of us, doesn’t like the heat. Tiller admitted the gelding was flat. There was less skip in his step. And the race didn’t unfold in a manner ideal to a horse that does not like to be defeated.

Tally up his remarkable career, and the Bold Venture was his 22nd stakes win, and the 25th win of his career in 31 starts. The Bold Venture had eluded Pink Lloyd in two previous tries. He finished fifth in 2018, then last year, he broke through the gate and was declared a non-starter in his eagerness to get on with it. That proved to be his only loss last season in seven starts.

This time he broke like a pro, and his jockey, Rafael Hernandez had to put together a race plan in a 6 ½-furlong sprint with no pace. Initially, he went right to the front in tandem with Malibu Secret, running between horses with Roaring Forties on the outside. But the jockey eased him back behind the leaders.  “I just sat behind them and waited for the time to push the button,” Hernandez said.

Hernandez didn’t want to be on the front end. Pinkie is at his best when he has to chase somebody down. Pink Lloyd settled down in his hands. But he ended up squeezed between horses. Pinkie doesn’t like that, either, according to Tiller, who first won this race in 1977 with Pres de Tu. (That’s 43 years ago.)

When the field turned for home, Pink Lloyd knew what he had to do. And his peers weren’t cooperating. There was a wall of horses in front of him. Pink Lloyd found the narrowest of seams between the two front runners and slipped through to the lead. The 3 to 5 favourite held off a furious final charge from Mark Casse’s ambitious Olympic Runner and Pink Lloyd won by a neck in 1:16.03.

“He’s done everything,” Tiller enthused. “He keeps doing everything. He overcame a bad trip today…I think he kind of thought it was over and that horse came running – run a big race – so we won again.

“I’ve been here 54 years, and I’ve never seen a sprinter like that,” Tiller mused. “All he wants to do is win. And he’s an eight year old.”

This quiet Oaks day in front of empty stands, also featured the $175,500 Dance Smartly Stakes at a serious 1 ¼ miles on the turf, and the $178,850 King Edward Stakes at a mile on the grass, a kind of precursor to the Woodbine Mile next month.

Theodora B. did not care that bettors pegged her at 11 to 1, and led every step to defeat five others by 1 ¼ lengths. She got away with pedestrian early fractions: 26.89 for the first quarter, and 51.80 for the half. After that, nobody could touch her when the 5-year-old daughter of Ghostzapper just ran faster the further she went, stinging her opposition with a 23.24-second clocking to the mile and winging away from them all with a 22.87 final quarter for a final time of 2:02.35.

“I knew someone would have to really be running to get by her,” said Justin Stein, riding Theodora B. for the first time. “She was giving everything she lad. And I had a lot of horse left in the tank.”

Stein had galloped her on Friday and found her strides long and ground-eating.  “A lot of power,” Stein said.

March to the Arch now looks like a solid contender for the Woodbine Mile, after helping Hernandez to his third consecutive stakes win of the day. The 7 to 2 shot trailed the field but angled wide for the stretch drive and won over pacesetting local horse Admiralty Pier.

Sullivan said that although March to the Arch came out of the gate rather awkwardly, and collided with another horse, Hernandez never panicked and took his time with the 5-year-old son of Arch, owned by the Live Oak Plantation. “He waited for the right moment,” Sullivan said. 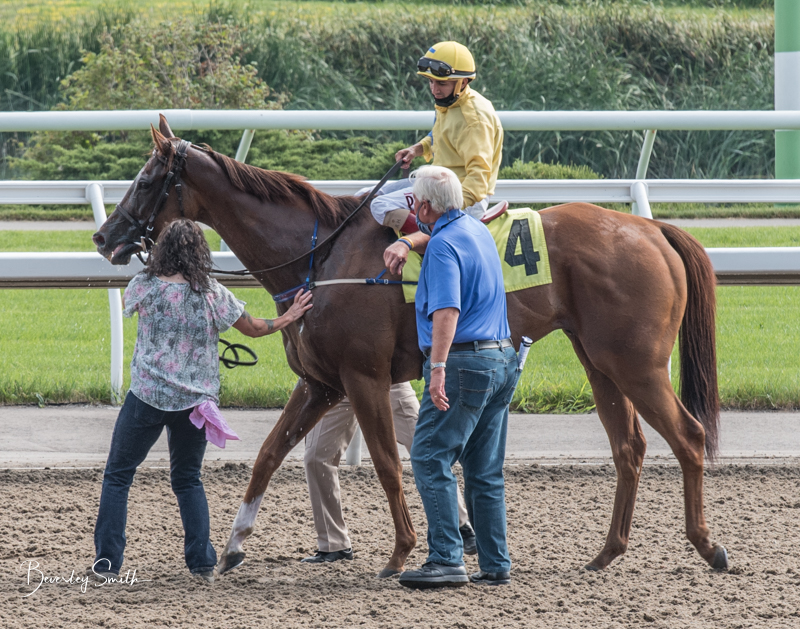