HOLD YOUR HORSES: on May 7, the Bob Baffert Stable was notified that Medina Spirit had tested positive after the running of the Kentucky Derby for the Class 3 drug, betamethasone, a corticosteroid. Tests showed 21 picograms of it in his system. Baffer’s sprinter Gamine tested positive for the same drug last year when she finished third in the Kentucky Oaks, and was disqualified to last. Baffert fined $1,500.

Baffert says his barn had never administered betamethasone to the horse and is asking for a test of the second sample. If it still shows the presence of betamethasone, Medina Spirit will become the second horse to be disqualified from the Kentucky Derby because of a positive test. (Dancer’s Image tested positive for phenylbutazone in the 1968 Derby.) Mandaloun will be moved up to the win. His connections had not intended to contest the Preakness next weekend.

Betamethasone is considered a therapeutic drug. The Kentucky Horse Racing Commission required a 14-day withdrawal time, but last fall, it ruled that any level of the drug was a violation.

“Failure to comply with the rules and medication protocols jeopardizes the safety of the horses and jockey, the integrity of our sport and the reputation of the Kentucky Derby and all who participate,” read a Churchill Downs statement, released today. Churchill has banned Baffert and his horses from the track pending the resolution of the issue.

Baffert has been at the centre of a spate of positive tests and judgements in recent years, involving Triple Crown winner Justify, Gamine, the filly Merneith and Charlatan. “I don’t know what’s going on in racing right now,” Baffert said in a media scrum at Churchill Downs today. “But something is not right. I don’t feel embarrassed. I feel wronged.”

He said he’ll fight the finding “tooth and nail” and will try to determine if the positive drug test actually came from Medina Spirit.

John Velazquez. Call him Johnny V, if you will. Such a fixture on the American turf scene. Now getting long in the tooth for a jockey. But count him out at your peril.

The 49-year-old native of Puerto Rico (he learned to speak English watching ‘The Littlest Mermaid” with the daughter of friend/agent Angel Cordero Jr.), booted home a horse under the radar, a horse that so many had dismissed. All along, he had been telling trainer Bob Baffert that the horse had a chance.

In this way, Medina Spirit, small and mighty and determined and originally a $1,000 yearling purchase, won the 147th running of the Kentucky Derby May 1. He gave a surprised Bob Baffert his record seventh Derby win. Derbies fall into his lap, it seems. Favoured Essential Quality charged at Medina Spirt in the stretch after an outside trip all the way, but finished fourth, unable to cut into Medina Spirit’s bravado.

Medina Spirt has never thrown a clunker in his life. Yet he was overshadowed by Baffert’s other stars, Life Is Good, and Concert Tour, who both fell by the wayside in the race to the Derby. Still, Medina Spirit, son of Protonico (stud fee $5,000! And probably rising!) has never finished worse than second. Ever.

Velazquez figured that Medina Spirit should not race off the lead in the Derby.

Baffert admits he usually comes into the Derby show with heavyweights. And there’s a feeling of relief when a favoured horses like American Pharoah and Justify win. This time not. He just enjoyed himself. “I came in here under the radar,” he said. “I thought, well, maybe he’ll get a piece of it or something. But Johnny, he kept telling me if he improves off his last race, he’ll run well.”

Velazquez’s agent, Ron Anderson, told Baffert that if Medina Spirt just improved a couple of points on the (Ragozin) sheets, “you can win this thing.”

So Velazquez put Medina Spirt on the lead, and the colt was going easy. And as the battle heated up,  horses started coming to him.

“I kept watching for all those horses to pass him,” Baffert said. “When they turned for home, I go, ‘well….”

They didn’t start rooting yet. When the horses got to the eighth pole, Baffert thought Medina Spirit just might have a shot. “I felt bad, because some of the connections with the other horses were around there, and we got pretty loud there. But it was just thrilling.”

But Baffert hands it to Velazquez. “He’s so cool,” the trainer said. “Such a professional. When you work with the guys like him, like the Mike Smiths, they’re just so smart. They know every move. They know every horse, what they’re going to do. He knew exactly what he was going to do.”

Baffert just left it up to Velazquez. He told the jockey: “Look, you ride him. I don’t care what you do. You know the horse really well. And here we are. I’m just so excited.”

Velazquez said he liked the little horse. “I know he’s all heart,” he said. “Strategy was very simple: break out of there and try to put him in the lead. If somebody wanted to go faster than me, let him have it. I know we were quick.

“And the more I looked at the race, the more I studied the race, I knew he was faster than the rest of the horses. And especially the way he breaks out of the gate. And talking to Bob, listen, the whole team, what a great job to keep this horse going the way he’s done. I knew he was going to be a fighter. I rode him twice before and he fought for second every step of the way.”

(Baffert said Velazquez is so skilled at breaking horses from the gate, he would have been good at riding the quarter horses he trained early in his career.)

People got off the horse, Velazquez said, after some Santa Anita races over a fast track. But Velazquez said he ran good races at Santa Anita. “I didn’t lose hope in him,” he said. “I liked him. I love everything he did and he showed up today.”

Of his two races at Santa Anita, Medina Spirit got hooked at the quarter pole, and he fought. “I know he was going to fight anybody who come to him and he did today,” Velazquez said.

“Every time I asked him for more, he kept going more and more. That’s all you ask of a horse. When you ride a horse like this, they fight.”

Baffert said the previous time Medina Spirit raced, he got behind horses that went really fast. “He’s not a horse that really finishes,” he said. “He doesn’t have another gear. He’s just steady.” Velazquez made best use of the horse’s abilities.

The jockey admitted he got more tired than Medina Spirit did down the stretch,. “He was fighting for every bit of everything I asked him to do. I was so proud of him, because we got to the 1/16th pole and he kept putting the ears down and kept fighting. …I kept riding much harder than he was going. I was not afraid.” 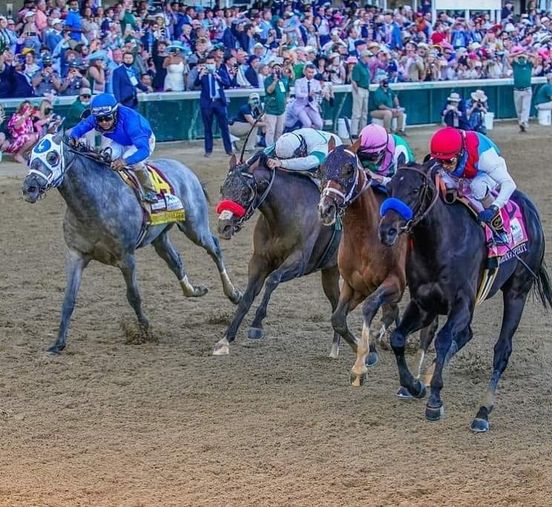 Owner Amr Zedan, who bought Medina Spirit as a 2-year-old for $35,000, said he watched the race from the floor, with a lot of people all around him. And he couldn’t really see what was happening, especially in the stretch.

“It just went gray,” he said. “All of a sudden, everybody is jumping on top of me. I don’t know. It was emotional. It was surreal. It was just amazing.”

Zedan got into the sport only five years ago, when he bumped into Baffert at a Dubai airport on his way to the Saudi Cup. They sat down, talked two hours. Zedan said something ridiculous: “Maybe we can get together and win the Derby.”

But then Zedan took up with top bloodstock agent Gary Young, along with Taylor Made Farm and Frank Taylor, and they “find this little horse,” Baffert said. They looked at him. They liked him.

Suddenly, he was training. Baffert had him with his Los Alamitos string. His assistant there told him: “You know that horse they didn’t give much for? I think he’s okay.”

So Baffert brought him to Santa Anita, and he broke his maiden there last December. “It’s just been a Cinderella story,” Baffert said. “Even today, [Zedan] was asking me: ‘Can we light the board?’

“I don’t know. We might. You never know. That’s what I love about this business. Nobody knows for sure.”

Baffert said he’s grateful that he can still compete at this level, that he still has clients. “I’m like Johnny,’ he said. “As you get older, the windows start closing. You have to work harder at it. It’s tougher.” Baffert is 68 years old.

Throughout most of his career, Velazquez seemed cursed at Churchill Downs. Three times, he had been slated to ride favourites: Quality Road in 2009, Eskendereya in 2010 and Uncle Mo in 2011. All three were scratched with injury just before the race. Velazquez was 39 when he was to ride Uncle Mo. He had 11 big goose eggs with the Derby before that, finishing 19th three times, 15th, tenth.

Then he picked up a mount on Animal Kingdom when regular jock Robby Albarado was injured just before the race. And Velazquez won. Then he won again with Always Dreaming in 2017, Authentic last year. He’s won four of the 11 past Derbys.

And hey, he also rode the winner of the Kentucky Oaks the day before: Malathaat, which won by a neck after a tense stretch battle. And he gave all his peers a lesson in riding. Irad Ortiz, on second-placed Search Results, reached over and patted Velazquez on the back after the wire.

“I am blessed with the opportunities I have been given,” Velazquez said. “I never thought in my wild dreams that I would win four Derbys…Bob has given me the opportunity. I’m 49 years old and to think that getting this opportunity at this age, it doesn’t happen in this business. So I’m very grateful and very thankful. That’s what keeps me hungry. I think I do a good job in what I do. And he has given me the option to stay around and ride these kind of horses.”

Baffert calls Velazquez “Mr. Positive” for his belief in a little black colt that got only one bid ($1,000, the minimum) at a yearling sale. “Don’t worry, we’re going to win it,” he recalls Velazquez saying. “I need somebody like that, because I always go in: I’m ready for that punch in the gut in this business. “

He says he may never have another horse good enough to come and win an eighth Kentucky Derby. He doesn’t want to come with an 80 to 1 shot. (Medina Spirit went off at 12 to 1.) “But we’re not going to give up,” he said.

“As long as the clients still want me. I’m like Johnny, as long as they still want us, we’re going to stay in there fighting away, trying to win these things.”