Home » Blog » Lamaze and Millar at the Royal
Tweet
0 Shares 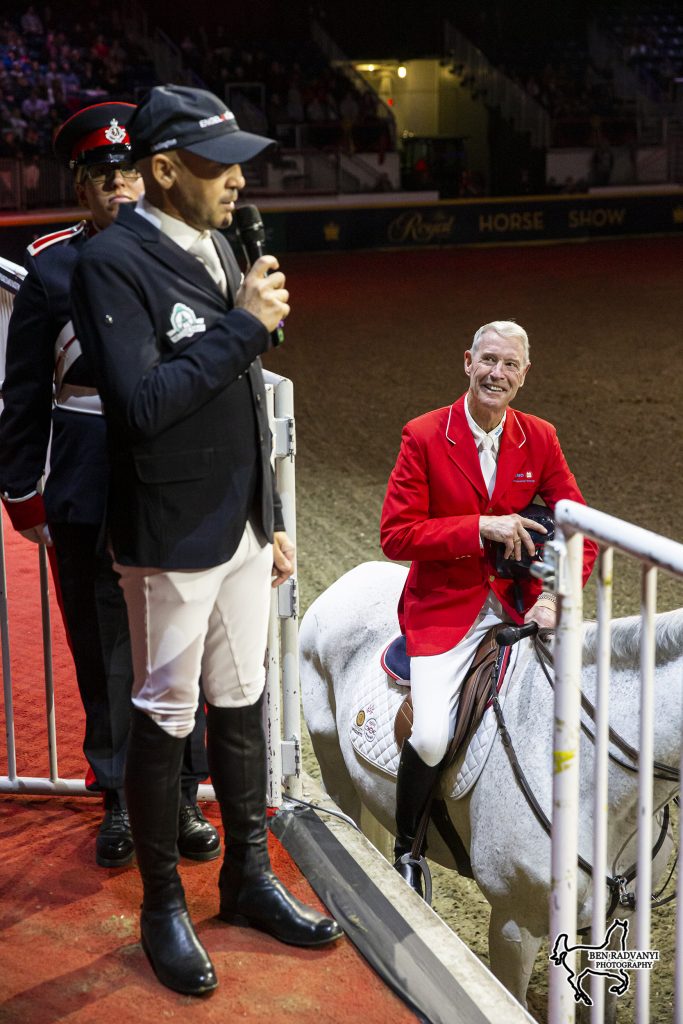 The minks and the frothy dresses were one thing. Show-jumping royalty was another.

It was all there on Thursday (Nov. 7) at the Royal Agricultural Winter Fair horse show, an event, as storied show-jumping star Ian Millar said: “very unique in the world. There is nothing like it.” This year, it was a homecoming of sorts, a gathering, a memory of memories.

The $85,000 Big Ben Challenge provided the setting, named after Millar’s “old pal,” the strong-willed giant of a horse that led Millar to many triumphs over the years. It seems as if everybody came to the party. Go through the list, and there were world former No. Ones astride top horses, former Olympic gold medalists, and the current world No. 4, 7, 10, 11, 14, 28, 31, 36, 38, 42, 49. Toughest group perhaps the Royal had ever seen.

Top that off with the homecoming of 2008 Olympic gold medalist Eric Lamaze, who had been to the Royal only once (in 2011) since he moved his headquarters to Belgium from Canada in 2006. And there was a homage paid to 10-time Olympian Millar, 72, who has just  retired from the ring as the longest-serving Olympic athlete at 10 Games. And that’s not counting a win at the alternate Olympics in Rotterdam in 1980, following the boycott of the Moscow Games.

From the shadows emerged Lamaze, gritty despite a brain tumour, to pay tribute to Millar, his hero. “As a young man, I watched Nations Cups at Washington, New York and the Royal,” Lamaze, 51, said. “I was glued to the TV every Saturday from the end of October to November to watch them. The Canadian team had Beth Underhill [who last weekend won the Canadian show-jumping championship at age 57], Hugh Graham, Mac Cone, Jay Hayes. These are the people I looked up to.

“But I looked up to no one more than Ian Millar,” he said. Lamaze watched carefully the way Millar trained a horse, to create lightness, to ride them forward, ahead of his leg. He watched Millar’s heroics aboard Big Ben. He watched Millar 99.9 per cent of the time.

Captain Canada was a man of few words, Lamaze said. But he didn’t need to say much to impart his opinion. “There was a look in his eyes,” said Lamaze. “He would say: ‘Well done,’ or ‘Step up your game.’” Lamaze said. “ I got both looks.”

“He was a fantastic rider for as long as I’ve known him,” Lamaze continued to a packed house at the Coca Cola Arena. “He was a man that truly rode for Canada. It meant the world to him. And it meant the world to me. Our own performance was second and Canada was always first to us.

“It was an honour to ride with this man. What an era. I’m so happy to grow up with him. I learned so much from him.

“I’m going to miss that eye contact that you gave….Well done, my friend.”

Lamaze’s words touched Millar deeply. “When I see Eric Lamaze ride, I see magic on a horse,” he said.

Millar’s first appearance at the Royal was 50 years ago. “There will be the odd person in the audience who wasn’t even on the planet at that point,” he said. “And for 45 of those 50 years, I competed on various Canadian international teams or represented Canada. And they were my proudest moments. My son and daughter have competed here. They have represented Canada. Our students have. It’s just been a very, very significant part of our lives.”

The recognition the Royal gave to Millar on the night of a Grand Prix named after his best horse meant a great deal to Millar. “I thank the Royal from the bottom of my heart,” he said. “People will say to me that: ‘You’ve done a lot for the Royal,’ but I will say: ‘The Royal has done way more for me than I have ever done for the Royal and I am eternally in the Royal’s debt.’”

As the Big Ben Challenge got underway, Millar and Lamaze stood shoulder to shoulder at ringside, watching some of the early competitors together, their hands circling the course as the riders had. Expertise at work.

Then Lamaze went out and created magic, one of 15 riders to make it to a jump-off. The tenth rider into the ring, Lamaze had to cut corners with his Olympic mount Fine Lady, and he did, sizzling around the jump-off course and setting the bar at 37.17 seconds without a knockdown, of course. 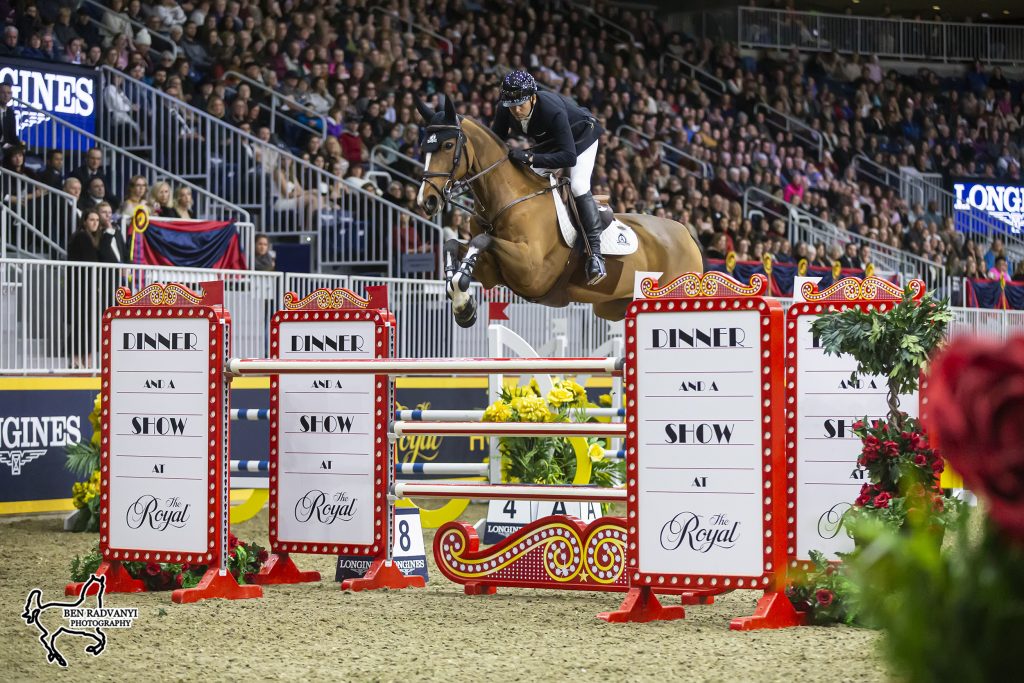 The only horse/rider team to best Lamaze’s incredible round was Britain’s Ben Maher aboard his 16-year-old Rio Olympic mount, Tic Tac. Maher, a former World No. 1, (currently No. 4), hasn’t been to the Royal in 10 or 11 years, but he hustled like nobody’s business. They finished in 36.75, shaving .42 seconds off Lamaze’s time.

“I think a lot of people didn’t like me in the stadium tonight, having defeated Eric,” said Maher, 36, a member of the British team that won gold at the 2012 Olympics at home in England. “But it’s sport and I always try my best.”

Another great Canadian name, Mario Deslauriers finished seventh, with a clear round in 39.06 with Amsterdam. McLain Ward, No. 10 in the world currently for the United States, didn’t make it to the jump-off. Beezie Madden, No. 7 in the world, wasn’t quite quick enough with Garant, finishing in 38.83.

So the long-legged Maher shared the spotlight with his Canadian peers. “It’s great to be here,” he said. “It’s an amazing atmosphere and I’m a little older now and a little more experienced. It’s always great to ride in an arena like this.”

Maher had only one horse with him this week, so spent a lot of time sitting on the bench, waiting for this class. “Luckily, he made it worthwhile,” said the Brit.

The course, designed by 1976 Olympic individual silver medalist Michel Vaillancourt, seemed deceptively easy, as 15 of 23 entries got through it without a fault. “There were only 23 riders this evening,” Maher explained. “There were 23 really good riders and it was the second [international] class, so a lot of riders were waiting for this prestigious class. And the horses were jumping great in these conditions.

“I thought it was a difficult enough course. It wasn’t the biggest class on a Thursday evening, but it was difficult. The riders just made it look easy tonight.”

The jump-off was another story. It was a twisty, twirly thing, with long gallops and options for tight and tighter turns. Jump No. 7, a vertical, proved troublesome for many.

Maher’s plan? “I was a bit undecided between the first and the second fence,” he said. “But he’s a very experienced horse. He came in nicely on the inside of the vertical there and I was very surprised. He hit the second fence pretty hard [it stayed up] which he’s naughty. He shouldn’t do that. He knows better than that.

“But actually it helped me for the rest of the course,” Maher said. “I was able to go faster than the others. He’s not always the easiest to turn. He gets a bit fussy with his head. So once I got the first four jumps out of the way, I just coasted the last three jumps.”

It was an easy decision to come to Toronto since Tic Tac has been in North America for the past few months. “This was always the plan to bring him here,” Maher said. “It’s a great show and you have a World Cup qualifier [on Saturday] and great sport. We try to go to different locations.”

Jane Clark, an American who owns Tic Tac (and who has owned many of the best show-jumping horses in the world, was not able to come to Toronto. But Maher said he tries to split his time between North America and Europe. He has a boatload of good horses at home (his other top horse is Explosion),  currently being handled by a competent assistants, a great number of supportive horse owners, and sponsorships coming out of his ears. It’s been a good year for Maher.

Although he’ll compete in the World Cup qualifier on Saturday, it’s not at the top of Maher’s priority list to qualify for the World Cup Final in Las Vegas. If he does, great. “I’m in the position where I have a lot of nice horses next year,” he said. “So I have to see.” Tic Tac is 16. “He deserved this win,” Maher said. “He’s been knocking on the door a bit this year. He didn’t jump many shows, but he had a couple of second places.”

Maher said he hasn’t made too many plans past the  Olympia tournament at home in England at the end of the year. He’ll give himself a break in January. He’s lame, himself. “There are one or two things I have to sort out myself,” he said. “I’m not walking the best, so I’ll get myself fixed up for next year with fresh horses.”

He calls his leg injury “wear and tear,” causing him pain. “It’s a long way from my heart,” he said.