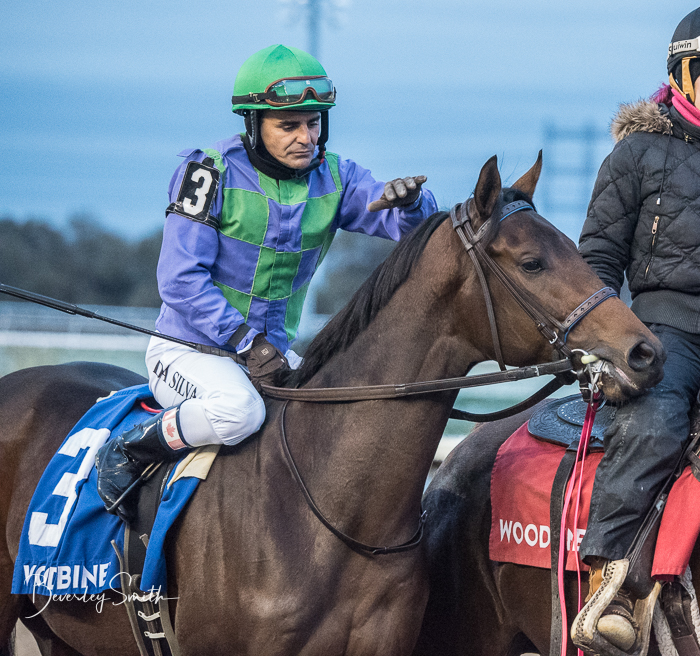 Ivan Dalos shakes out the equestrian gene pool from his little band of broodmares and out come more and more stakes winners, year after year. Incredible.

The latest? Avie’s Flatter, impressive winner of the Coronation Futurity on Nov. 18. He’s not to be confused with Ami’s Flatter, winner of the Breeders Stakes, third jewel of the Canadian Triple Crown a few years back. We’re starting to catch Dalos’ drift in how he names the youngsters he creates so carefully. (Dalos once said he had Amis up to his eyeballs. Now the Avies are starting to catch up. )

Dalos’s most recent star is a son of Avie’s Empire (a daughter of Empire Maker, see?) herself a daughter of Dalos’s wonderful U.S.-bred mare Fly for Avie, winner of the E.P.Taylor Stakes as she upset the favourites and wrestled them all into submission.

Before her date with Flatter came along, as a broodmare, Avie’s Empire was bred to Mineshaft and begat Avie’s Mineshaft, who saluted her granddam by doing much what she did: upset the cart to win the Wonder Where Stakes and defeat Dixie Moon earlier this year.

The day that Avie’s Mineshaft won the Wonder Where, Dalos had to make another trip to the winner’s circle because that was the day that her younger half-brother, Avie’s Flatter, won the first start of his life. Two wins in one day. Something is obviously working. (And Avie’s Flatter was no secret: he went off at just less than even-money among a group of maidens.)

Off that one start, Avie’s Flatter shot high, running in the Summer Stakes, a Breeders Cup Win-and-You’re-In race that featured U.S. entry Fog of War (favoured in the Juvenile Turf but withdrawn because of injury) and War of Will. Avie’s Flatter was pinched back at the start in that race, settled at the back of the field, but flew up in the stretch to finish fourth. Trainer Josie Carroll said he was tired in that effort, and needed that race for bigger Canadian things.

So he won the Cup and Saucer in his third start, always considered one of the top races for 2-year-olds in the country. And now he’s won the Coronation Futurity, the other biggie. That makes him the early favourite for next year’s Queen’s Plate.

Jockey Eurico Rosa da Silva was even more animated than usual when he returned after winning the most recent stake: “He’s a MACHINE!” Da Silva said.

It wasn’t a carefree script to the winner’s circle. Avie’s Flatter stumbled at the start (he had let most of the way when he won the Cup and Saucer, and when he won his first start, also.) He didn’t get to the lead. The ebony-coated D Magician took that role, his white face tipped to the front.

But the pace wasn’t very fast. Still, Da Silva decided to get Avie’s Flatter to relax, and it wasn’t all that easy.

Finally, when Da Silva decided to go – because he had so much horse on his hands – everybody else sped up too. Da Silva then relaxed, too. He didn’t ask the colt until the three-eighths pole, but Avie’s Flatter had to fan wide to get around the eight-horse field. Widest of all, he bore down on the finish line like a train and swept past the rest.

That spelled Da Silva’s 204th win of the season and he’s on pace to break the long-held record of Mickey Walls, who rode 221 winners in one season. The Coronation was Da Silva’s 27th stakes victory this season. He has about 50 wins more than any other rider this season.

“I’m very very lucky,” said the Brazilian born rider. “I ride for the best trainers here. Josie Carroll brought this horse today. You see the horse. You just look at that horse and you can tell. I have no words to say how grateful for everybody.”

And Jose Carroll? She knows the way to the winner’s circle of the Queen’s Plate, too. She won with Edenwold in 2006, the first female trainer to do so. He had been the juvenile champion the year before.

Avie’s Flatter’s sweep is the first in nine years. In the past 18 years, there have been only three sweeps of the two races: Leanatus Anteas in 2006 and Hollinger in 2009.