Eric Lamaze considers himself lucky, even though his life reads like a tragic novel and he’s currently undergoing intense treatment for a brain tumour.

He says although his future is uncertain, he’s making plans. This past weekend, he says he will put all of his energy toward competing at the Tokyo Olympics next summer. And then step aside from the competitive ring.

“I don’t know what is in the future,” he said during a public autograph signing at the Royal Agricultural Winter Fair this past week. “But I am very content with my career. I’m giving it all for Tokyo. Tokyo means the world to me, more than anything. It’s a personal victory to even be there for me. And I want to make it a personal victory to bring back a medal for Canada.

“I hope to do it as a team, because that would mean more to me than winning an individual medal. My heart is set on this. I want this to happen. And my whole year is around that.

“I feel that once that has been accomplished – and if it does get accomplished – I’m going to feel a little burned out from it. But I think it will be time that perhaps I will take care of my health a little bit more seriously and give back to the sport. I love teaching.”

That being said, Lamaze encountered one more roadblock to his life when Pan American team member Nicole Walker tested positive for a metabolite of cocaine earlier this week. Because Canada qualified for the 2020 Games with a fourth-place finish at the Pan Am Games in Lima, Peru, Walker’s suspension thwarts that qualification. Walker will appeal. An individual can still qualify.

Lamaze arose from an unstable family life to become the 2008 Olympic individual gold medalist in show jumping, as well as helping Canada win the team silver medal that year aboard his best horse, Hickstead. Astride Hickstead, Lamaze became No. 1 rider in the world for the first time in 2009.

Hickstead died in 2011, just after he had finished jumping a round at a tournament in Verona, Italy, but Lamaze rebuilt his stable and won an Olympic bronze medal in 2016 at the Rio de Janeiro Games.

Lamaze has competed sparingly since his diagnosis almost two years ago, but he returned to Spruce Meadows in September and dazzled, despite his frail appearance. He won two classes and finished fifth in the $3-million CP International, an event he won twice with Hickstead.

He hadn’t competed in two months – since Spruce Meadows – when he came home to ride at the Royal Winter Fair Horse Show last week for the first time in eight years, mainly to greet fans and friends. Yet, he is still undergoing treatment in Europe, where he is based for most of the season.

“From the moment I met with my doctor, I told him: “’I’m not going to be your usual patient because my life is continuing and I’m going to keep riding,’” Lamaze said. “’You guys go to work but I’m also going to work.’

“Somehow we made a great team,” Lamaze said. “I managed to be here and I hope things for me go in the right direction and I can be here many more years.” 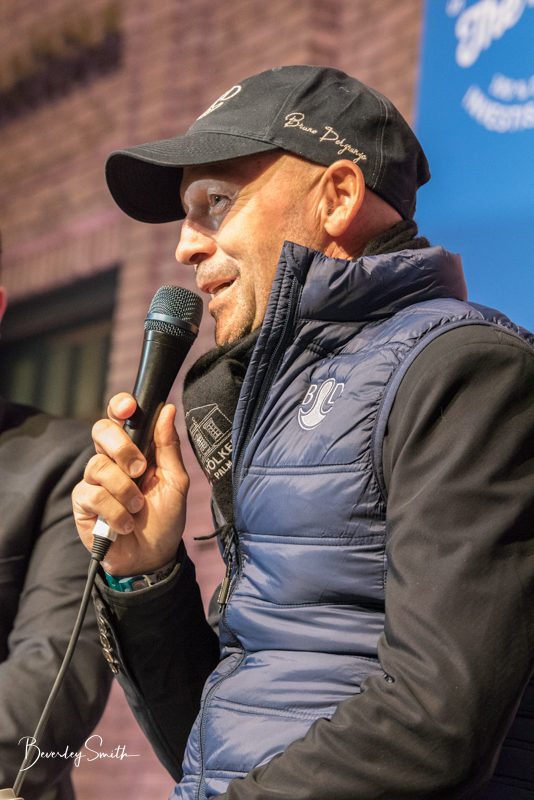 At the Royal, looking less pale than at Spruce Meadows, but still pale, Lamaze was brilliant, winning a $37,000 McKee Family International Challenge with his Olympic mount Fine Lady on the first day. He also finished second behind former World No. 1 Ben Maher (GBR) in the $85,000 Big Ben Challenge, defeated by only .42 seconds. And he was second in the $50,000 Canadian Open to Australian speedster Rowan Willis, defeated by only .06 seconds in a jump off. With a third and a fourth in two other classes, Lamaze was both the leading international and leading Canadian rider at the Royal, a tournament that had the deepest level of talent in its history this week.

On the final night, Lamaze finished sixth in the $210,000 World Cup qualifier, (dubbed the Hickstead Trophy), after failing to clear the very final fence of a torrid course, designed by 1976 Olympic silver medalist Michel Vaillancourt.

The course was so exacting that it felled many of the top riders in the world. Beth Underhill, newest Canadian champion, retired after six of 13 fences. Her horse refused a Liverpool and then Underhill took a double combination while riding in only one stirrup.

Amy Millar, daughter of Ian, and former Canadian champion, didn’t make it past the fourth fence. She and her mount, Truman, cleared it, but the horse took a sudden, inexplicable left turn and Millar ended up pasted against the rink board, off her mount.

Laura Kraut of the US, recent winner of the World Cup qualifier at the Washington show, had a rail down and didn’t make it to a jump-off. Former world No. 1 Kent Farrington of the United States – who won this event two years ago – knocked the first part of a double combination down – a fence that fouled many. The ever-ready, ever-lasting Margie Goldstein-Engle of the United States ran into troubles in that same combination. McLain Ward, who had won this class nine times at the Royal, didn’t make it to the jump-off either, knocking down the first rail of a triple combination. Beezie Madden, a stalwart of the U.S. team (four Olympics, two team gold, twice a World Cup Final champ), had three rails down for 12 faults. It was a bit of a blood bath, with only four advancing.

Lamaze was third into the ring with Chacco Kid, and he floated around this testy, difficult course, the crowd silent, barely breathing. They were watching poetry, until Lamaze came to that last fence, knocking down a rail. The crowd groaned loudly in disappointment. There is something cruel about going through the war, unscathed, and missing one last rail. Lamaze exhaled as he left the ring.

Vaillancourt, the only other Canadian to win an individual show-jumping medal at an Olympic Games, is also from Quebec, like Lamaze. And they speak regularly on the phone.

“What he’s doing is magic,” Vaillancourt said. ”First of all, most people [undergoing cancer treatment] physically could not do what he’s doing. They just couldn’t handle it.”

Vaillancourt said Lamaze has been going through intense rounds of chemotherapy “and more” to get to this event. “What they put him through in order to be here today is unbelievable,” he said. “It’s just been an incredible road. And between all this, he finds the time to get on a horse because that’s the only time he feels right.

“The rest of the time, life sucks.”

Last week, Lamaze was shadowed by a physiotherapist, who worked on Lamaze before and after classes. Vaillancourt said Lamaze will now probably take a week off and sleep for 24 hours a day, totally exhausted by what he did in Toronto. Lamaze did not do scrums after his classes. Lamaze doesn’t have enough energy to take his horses through their warmup sessions before a class. He has somebody else do it.

“You can see that he is not well, but this is the only time he feels wonderful,” Vaillancourt said.

Lamaze says he feels it is much easier to compete while he’s getting treatment than to be undergoing treatment alone. “Everybody has a different story to deal with cancer,” he said. “I don’t feel sorry for myself because I have come across many young kids, but lots of them won’t see their 50th birthday.” Lamaze is 51. 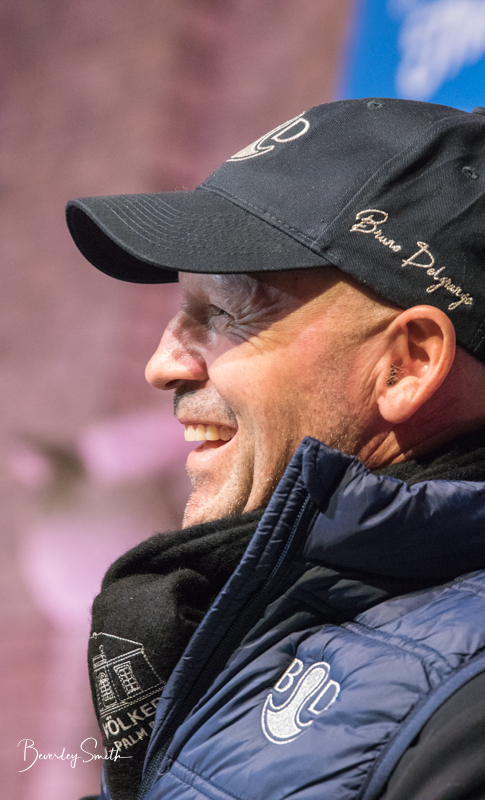 Horses have always been Lamaze’s salvation. They led him out of a troubled family life. They were there when he lost two chances of competing at Olympics (1996 and 2000) because of positive drug tests. He considered retiring after the death of Hickstead.

It took Lamaze a long time to overcome the death of Hickstead – “much longer than I thought,” he said. “Many times I thought I was fine and I had overcome this, but I didn’t. To this day, I go on course and I do think: ‘What could happen? Will this horse do the same thing?’ It stays with you forever.”

But Lamaze said, life must go on. “You can choose to fold and walk away and step away from the sport,” he said. He said by 2011, the year that Hickstead died, he had already won more than he had ever dreamed. “I was okay with that, but I had some great friends who said I was too young, that I’ve got to keep going,” he said. They bought him a new string of horses.

Lamaze said he cannot see a future without horses. His doctors call his riding: “Eric’s medicine.” They tell him they don’t recognize him when they see him on a horse from the frail person they see in the clinic, getting treatment.

“You can do amazing things when you set your mind to it,” Lamaze said. “I’m the kind of guy who will take two or three days for myself, and feel sorry enough. I’ll deal with it on my own, then I’m ready to come out and try to fight. I’ll still do it.”

What Vaillancourt finds most incredible about Lamaze’s visit to Toronto is that he did it for his fans. Before an international class, he staged a question and answer session with ordinary folk, and then signed every autograph asked of him.

“He didn’t have to do that,” Vaillancourt said. “He didn’t come here to compete for the money. He came for his fans because he knows he might not have many opportunities to do that in the future. He doesn’t know what the future holds for him.”

Vaillancourt said he felt disappointed that Lamaze knocked the final rail down during the biggest class of the week. “He deserves to jump a clear round,” he said. “That was the only missing link to make this class a perfect success. But it’s the one rail he had all week. Can you imagine?”

“You run out of superlatives for Eric,” said Terrance (Torchy) Millar, a former Canadian chef d’equipe that Lamaze credits for some of his success. “It all seems so effortless for him. That’s a mark of true genius. Not with the medical issues, but he still makes it look effortless. He always did. It’s unique.

“No matter what difficulties ever surrounded him, in the ring, he focuses 110 per cent,” said Jay Hayes, who employed Lamaze for five years, from the time he was 15. “He’s faced many difficulties in his life. When he put the boots on, and went into the ring, everything went away. Always.”