White hearts are splashed right up the red sleeves of their racing colours. You can’t miss them.

Come Queen’s Plate day, the members of the Jack of Hearts Stable hope they’ll see these hearts bound to the front aboard their 3-year-old colt, Aheadofthecentury. (Plato once said: ‘Every heart sings a song.’ More about that later.)

Yes, he’s 15 to 1 in the morning line, but he’s been in the mix of late with two thirds in two Plate preps, and besides, there’s more on the table than statistics with this horse. Okay, it’s obvious. It’s about heart.

The stable was formed by Jim Aston, a retired insurance broker, and Neal Mednick, a communicator in many ways, in 2015. First, they approached trainer John Ross, who had shown a gift for picking good yearlings, 2014 Queen’s Plate winner Lexie Lou, being one. He snapped her up at the yearling sale for $5,500, earned $380,000 with her and then sold her to Gary Barber for $400,000.

With all of this in Ross’s rear view mirror, the Jack of Hearts folk asked the trainer to buy them some stakes horses. It’s a tall order, but he did. Out of the yearling sale, he bought Raglan Road, a filly that placed in three stakes the following year, and Cool Catomine, surprise 14 to 1 winner of the Prince of Wales Stakes at Fort Erie as a 3-year-old.

“That was a big surprise and very exciting,” said Barb Aston. “Watching that come in was the most unbelievable thing. You couldn’t see a thing because it was sunny. [The sun sets right along the view line of the homestretch at a race held very late in the day.]. It was crazy.”

That went well, so the stable has continued to ask Ross to buy more. And by this time a new member had jumped in: Bob Hunter, a retired steel executive who now works as a supervisor of ushers for Maple Leaf Sports and Entertainment.

Two years ago, Ross found a Midnight Lute colt. And Ross loved Midnight Lute. “No doubt that pedigree will go long,” he reasoned. Besides, he thought the colt the best-looking horse at the sale. Love at first sight, as they say. “I thought he would go for more money,” Ross said. “He was a beautiful, correct horse.”

The colt sold for $67,000 and Ross also joined in on the ownership. Stable member Judy Brioux (Neal Mednick) liked the name Aheadbyacentury, after a song by the Tragically Hip, because at the time lead singer Gord Downie has just been diagnosed with terminal brain cancer. At a group meeting, they discussed possibilities and went through a process of elimination.

“I just had a lot of luck naming horses with song titles,” Brioux said. She also had a lot to do with the naming of Raglan Road. With the Irish-bred Street Cry in the filly’s pedigree, Brioux suggested Raglan Road, which is actually a beautiful wistful song in the Irish tradition by Northern Irish-born Van Morrison, known for his hits “Brown-Eyed Girl” and “Moondance.”

Brioux, a fan of the Hip, had also liked another of their tunes: “Day for Night,” which pointed to the colt’s pedigree.

Mednick, who has had various careers, such as private investigation, journalism and public relations, actually liked another Hip song: “Nautical Disaster” but “it’s not a great name for a horse,” he said.

Aheadbyacentury was the last name standing. But alas, they discovered that the name had already been used by a Kentucky-bred filly that raced from 1998 to 2001 in Canada. She placed in races such as the Bessarabian, and she did win the minor Zadracarta Stakes.

Her name was spelled Ahead By a Century, born the year the Hip song was released. The Jack of Hearts ran the letters together. And 15 years had passed.

Still, winning a 1 1/8-mile event as a 2-year-old should always bode well for a horse that wants to go on to run the 1 ¼ miles of the Plate. And Ross says that Aheadbyacentury will prefer the longer distance. “I’m not going to sit here and say we will win it,” Ross said. “But I think it’s safe to say that we belong.”

(He is a fan of the Tragically Hip, too.)

And don’t forget: Aheadbyacentury is Hunter’s first horse. And he’ s made it to the Queen’s Plate. It’s still remarkable that a group of owners have bucked the odds to make it to the Plate after only three years in the business. 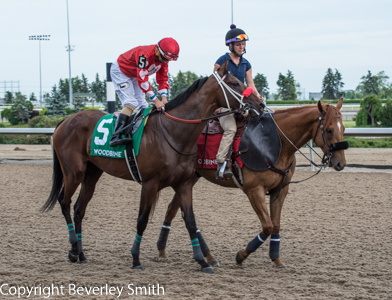 “We’ve just been incredibly fortunate and we’ve had John to pick these horses for us,” said Brioux, who describes herself only as a fan of horse racing before this last venture. “How lucky can you be?”

The group has come together in a very social way. Both Judy and Barb attended high school together. They rediscovered each other 20 years ago when they trundled down to Saratoga the first time. They’ve been back almost every year since. And Aston knew Mednick because they played hockey together. They all got along famously. “We had a ball,” Barb said.

They have lots of fun. Aston and Mednick call each other “at least every other day,” Barb said. “And they chat.” Barb feeds the horses carrots.

“And John Ross is the salt of the earth,” Barb said. “We couldn’t be luckier.”

“He’s really good at communicating everything to us,” Judy said.

Does a first go at the Queen’s Plate ramp up the intensity factor? Well, yes. The group held a Plate eve party, entreating their friends to help them prepare, and gather “excited and nervous racing fans.” Perspiration was to be provided by the Jack of Hearts Stable (although the intense heat wave would have contributed to it.

And the music at this soiree? Tragically Hip.